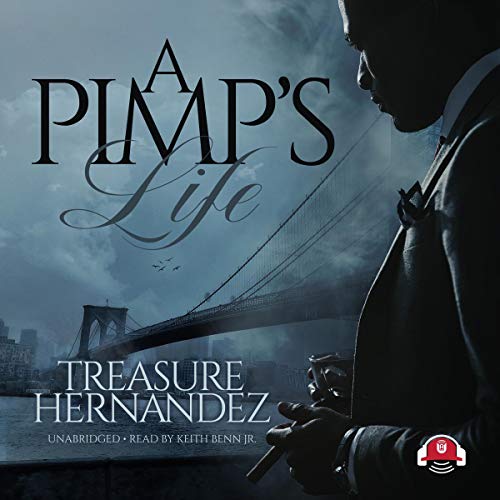 By: Treasure Hernandez
Narrated by: Keith Benn Jr.
Try for £0.00

In the tradition of Donald Goines and Iceberg Slim comes A Pimp’s Life, the story of the rise and fall of Mack Jones. He’s at the top of his pimp game in Queens, New York, until he breaks one of the cardinal rules of Pimping 101 and falls in love with one of his girls.

Destiny was once an innocent young girl tricked into selling her body, but now she’s as tough as the most seasoned professionals on the street. Then a tragic turn of events causes her to open her heart once again. When Mack is shot, she stays by his side during his recovery, proving herself to be as devoted as any wife would be to her husband.

After she sees that Mack has regained his strength, Destiny finally gathers the courage to leave the life behind her, and Mack is forced to make a decision. He won’t stop her from leaving, but he must decide if he will follow her out of the game. Will he stay with what he’s always known, or take a chance on love? And even if he does choose to get out, will the streets let him go that easy?

What listeners say about A Pimp's Life

I can't get past the narrator...I just can't! trying to give this back. I usually love Treasure Hernandez, but the narration killed it for me-sorry!

I am REALY struggling to make it to the end of this book. The narrator sounds like he just woke up and started reading or is about to fall asleep while narrating. I do like some of the characters but again, the narration is making it hard for me to connect and stay interested in what is going on in the story. I've been listening for 4 days. I can usually complete one of T. H.'s books in a day or 2 so I am a bit disappointed. I will continue to support this author but I probably will not finish this book.

When do Pimps fall in love with Hoes or wife Hoes up
This is NOT a Pimp's Life... Its Simpin at its Finest
You can tell a woman wrote this

I can’t with the narrator. I stopped at chapter 4 his voice/reading is annoying.

not worth my time

Fair story, terrible reader made it hard to understand who was who, expected much better

Narration was terrible but the story line was OK that's why I suffered to the end. It's to the point where I won't even listen to a book if this person is the narrator. It sounds like he's whining when he reads!

This was a good book. Lots of unexpected twists and turns. And I definitely wasn't expecting it to end the way it ended

The book was very entertaining and whitty.

There were some cliffhangers in the book and some deep bomb shells... And some of those love triangles... The love triangles shook me up.. If that would have happed to me.... I don't what I would have done...But the Bible does talk about some of these topics.... Y'all playing with fire but it was great listening..... I can't wait to read the next book.

I continued to wait for the book to take off. The book is one crazy book. I just didn't care for this book. I love Treasure, but this book was ridiculous. The ending made no sesne. There is no Destiny in this book. Also, who fell in love? The book was all over the place. I'll keep it, but I won't listen to it again.