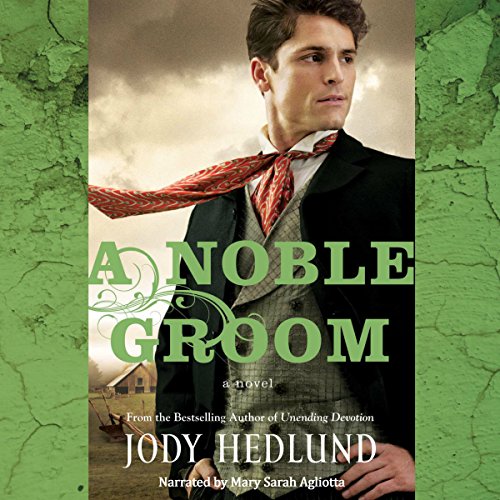 By: Jody Hedlund
Narrated by: Mary Sarah Agliotta
Try for £0.00

A historical romance from award-winning and best-selling author Jody Hedlund.

Recently widowed Annalisa Werner has the feeling her husband was murdered but can't prove it. Alone with her young daughter in 1881 Michigan, she has six months left to finish raising the money needed to pay back the land contract her husband purchased, and the land is difficult to toil by herself. She needs a husband. With unmarried men scarce, her father sends a letter to his brother in the Old Country, asking him to find Annalisa a groom. For nobleman Carl von Reichart, the blade of the guillotine is his fate. He's been accused and convicted of a serious crime he didn't commit, and his only escape is to flee to a small German community in Michigan where he'll be safe. He secures a job on Annalisa's farm but bumbles through learning about farming and manual labor. Annalisa senses that Carl is harboring a secret about his past, yet she finds herself drawn to him anyway. He's gentle, kind, and romantic - unlike any of the men she's ever known. He begins to restore her faith in the ability to love - but her true groom is still on his way. And time is running out on them all.

What listeners say about A Noble Groom

This historical romance is Book 2 in the Michigan Brides series, but it can be read as a stand-alone. Jody Hedlund, the author, has a unique flow of writing and style. The era of this novel is in the 1880's. I highly recommend this author and the narrator as well as this audiobook.

Oh my goodness! I loved this book so much! I can't even describe how exciting, mesmerizing, heartbreaking and exhilarating it is. The story pulls you in from beginning to end! And the narration is superb. Two VERY talented ladies! Thank you for this amazing experience!

2 of my favorite characters

I really fell in love with the characters in this story. Such a beautiful journey to take with them as they learn, grow and find true love. Excellently written and, as always, Mary Sarah Agliotta is just brilliant! The story is a great combination of mystery, suspense, adventure, humor and romance. Highly recommended.

I was spellbound as I listened to this book being read. I am so amazed at Jody Heglund’s ability to write so well. So many twists in the plot. So many references to living life as a godly man and woman even in the midst of such harsh cultural conditions and such harsh physical conditions. So thankful for a sweet love story that captured my heart! Well done, Jody!

what an amazing story

this book was the first I read by Jody Hedlund and I have since read every one of her books. I just decided to listen on audio and again was blown away at how much I enjoyed it. What a beautiful story.

A very good read or audible. The narrator is well known for her great storytelling as this well written story on love and forgiveness.
I enjoyed it

I thoughtfully enjoyed "A Noble Groom". The story line, the characters, and length of the book were perfect. Jodi Hedlund doesn't disapooint in developing full characters, adding depth and strength to each. She uses very descriptive language to help the reader fully engage the scenes and emotions involved. The is the first Audible book I've read narrated by Mary Sarah Agliotti and I look forward to listening to her again. The end of this book left me wanting more of Analise, Carl, and the children's story to continue, yet satisfied with the author's conclusion.....but wonder....a prince or princess? or BOTH!

This is the first book I have ever read, or listened to by this author. It was a beautiful story of a sweet love between the heroine, Annalisa and the hero, Carl. It was a love that grew over time and it felt real. He was the most caring man with a fun sense of humor that won Annalisa's heart. She was a woman who was so sweet and precious and loved her family. I highly recommend this book.

This story tore at my heart. Strong characters and storyline. Filled with suspense, murder, second chances, hidden identity and love. The narrator was really good for this storyline and overall excellent