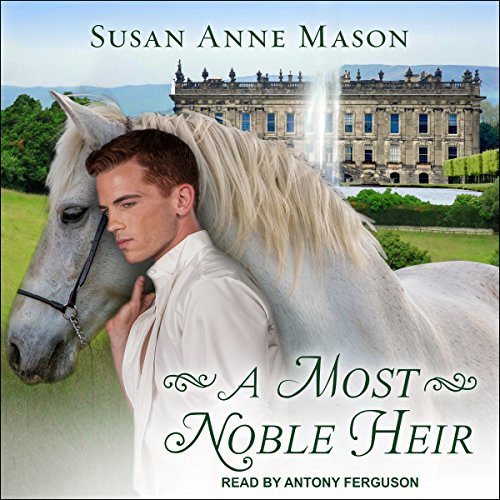 A Most Noble Heir

By: Susan Anne Mason
Narrated by: Antony Ferguson
Try for £0.00

When stable hand Nolan Price learns from his dying mother that he is actually the son of the Earl of Stainsby, his plans for a future with kitchen maid Hannah Burnham are shattered. Once he is officially acknowledged as the earl's heir, Nolan will be forbidden to marry beneath his station.

Unwilling to give up the girl he loves, he devises a plan to elope - believing that once their marriage is sanctioned by God, Lord Stainsby will be forced to accept their union. However, as Nolan struggles to learn the ways of the aristocracy, he finds himself caught between pleasing Hannah and living up to his father's demanding expectations.

At every turn, forces work to keep the couple apart, and a solution to remain together seems further and further away. With Nolan's new life pulling him irrevocably away from the woman he loves, it seems only a miracle will bring them back together.

What listeners say about A Most Noble Heir

The plot was good and well written. The narrator would get a 5 if he used the same level of emotion as the text. He acted the parts well, did a great job with the accents, and has a pleasing tone. Well worth it!

My favorite of this author’s books thus far!

Excellent storyline, characters and ending! My favorite of her books so far! Enjoyed the narration as well.

Wonderful clean romance with just the right amount of everything. I recommend this book and am looking forward to exploring this artist.

Great story, wonderful narration. Highly recommended. I really do like this author. I've listened to three books in a row. Waiting for her next release.