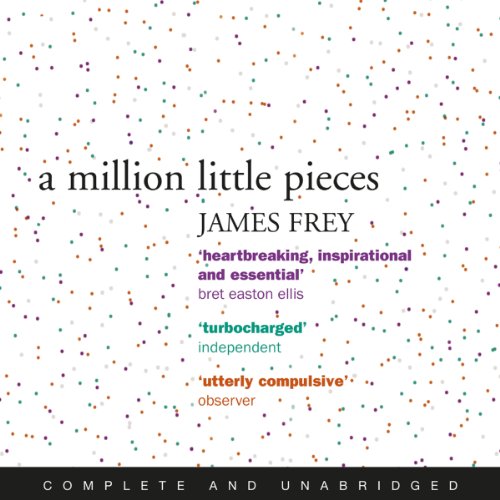 An intense, instantly engaging, hard-hitting, yet beautifully written memoir of a life beyond the brink that touches every nerve.

James Frey wakes up on a plane, with no memory of the preceding two weeks. His face is cut and his body is covered with bruises. He has no wallet and no idea of his destination. He has abused alcohol and every drug he can lay his hands on for a decade - and he is aged only 23.

What happens next is one of the most powerful and extreme stories ever told. His family takes him to a rehabilitation centre. And James Frey starts his perilous journey back to the world of the drug and alcohol-free living. His lack of self-pity is unflinching and searing.

A Million Little Pieces is a dazzling account of a life destroyed and a life reconstructed. It is also the introduction of a bold and talented literary voice.

"Excellent...Frey's storytelling feels compulsive, involuntary...poignant and tragic. The forthcoming film will almost certainly be a cult hit.... The good thing about Frey is that he writes as if he needs to; I hope his new compulsion thrives." (William Leith)
"James Frey's utterly mesmerising account...[is] easily the most remarkable non-fiction book about drugs and drug taking since Hunter S Thompson's Fear and Loathing in Las Vegas.... As a memoir, it is almost mythic. You can imagine it made epic by Martin Scorsese, the auteur of wayward American maleness in all its extremity.... Utterly compulsive." ( Observer)
"Clear sighted and intellectually honest." ( Literary Review)

The narration was appalling.

I read this book when it was first published and thought it was amazing. I thought I’d enjoy it again in a different format but the narrator ruined it. Sounds like a robot with an electronic voice is narrating.

This book grips you from the start, draws you into the characters and makes you feel part of it from the beginning. Your begging for the end and to know what happens to everyone way before you get there. Each characters story is strong. James is obviously the root player all the way through but wow what a rollercoaster of emotions and situations to go through. Absolutely first class amazing book.

So much repetition, narrator exaggerates too much.

Didn't finish it, repetitive and totally over exaggerated almost sarcastic(!) performance from the narrator. Couldn't reccomend.

I really enjoyed the book and I've already listened to another version of this book. The other version is much better read, the inflections in this one are completely bizarre and the protagonist comes across as completely unsympathetic as a result. Don't bother with this version.

As a medical doctor, I found the book to be a major eye opener to the massive struggle addicts have.
I don't care that the author embellished some aspects as has been reported.
It still made excellent reading. He is a gifted writer and I couldn't stop reading till I finished it. It's good!

I wasn't too sure to start with, i wasn't too sure on the narrator, they can make or break the story but pretty soon i was hooked. An amazing tale, i understand that not all was true, however i am sure that is does not mis-represent in any way.
it is truly inspirational, I am not an addict but it certainly made me view life a little differently!

I was recommended this book by a few people but the narrator was so awful, I had to return the book. I’ve never heard a book read so terribly, and I’ve listened to a lot of books on Audible!

I enjoyed this story - was a little disheartened by the opening as the statement had me questioning the validity of the book thought.

What a book! The reviews had it right it is a very good book, the way he repeats phrases, words, an feelings could have been tedious, but in the circumstances is highly effective. His descriptive passages of the challenges he faced down were inspiring. I am moved by the experience of listening to this book.

It matters not whether it is fact or fiction or both, how could it ever have been anything but motivating! People are moved because of a plethora of things, why would anyone sue someone or lose faith in the message of this book because the author has exaggerated, invented or hyperbolised events and passages. Rabbie Burns invented the phrase "Man's inhumanity to man" it looses nothing because it is from a fiction. Is King Lear's message lost because it is fictional?

A Million Little Pieces is a tour de force and if James Frey has bettered it, I want to read that too! Tim Flavin read this book very well, thank you both.,

I've had to return this book as the narrator was literally driving me mad. The repetition was so bad at times that I thought there was an error to the recording. I was interested in the story and recommended the book by many people but I just couldn't hack it. Shame.

This is one of my favourite books, the audiobook is good but I’m not in love with the narration because it sounds stunted and dull for most parts, another narrator would’ve been a better choice.

Where does A Million Little Pieces rank among all the audiobooks you’ve listened to so far?

What was one of the most memorable moments of A Million Little Pieces?

I have never listened to a book quite like this before. I thought I had purchased a fiction book..it turned out to be 100% true! The style in which this book was written was so powerful it almost felt like I was in James Frey's skin. It was the most moving and incredible story of a man digging himself into the deepest depths and then finding the courage to literally pull himself back into the light.
The friends he made along the way will surprise you and perhaps make you realise that no matter how degraded a person has become, that nine times out of ten, there is still a good person willing to help his fellow man inside.
Some people may find this a little bit hard to get into the story, but do persevere. I promise you, you will listen to one of the most thought provoking storie in a long time.