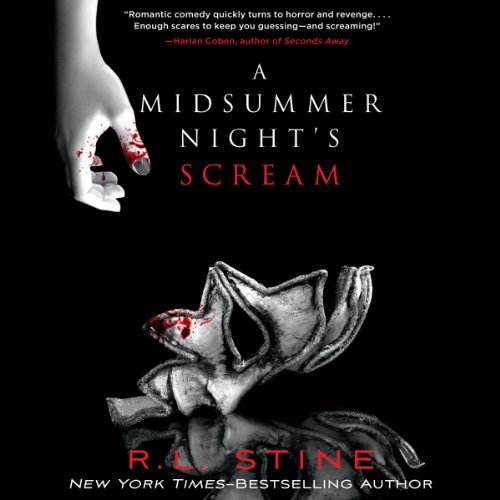 "Oh, what fools these actors be!"

It was a horror movie that turned into real horror - three young actors lost their lives while the camera rolled. Production stopped, and people claimed that the movie was cursed.

60 years later, new actors are venturing onto the haunted set. In a desperate attempt to revive their failing studio, Claire's dad has green-lit a remake of Mayhem Manor - and Claire and her friends are dying to be involved.

At first, Claire laughs at Jake’s talk of ghosts and curses. He’s been too busy crushing on her best friend Delia to notice that she’s practically been throwing herself at him. What does he know? And anyway, this is her big chance to be a star!

When shooting starts, though, the set is plagued by a series of horrible accidents - could history be repeating itself?

I started reading this and was hooked instantly, R.L. Stine is one of the best authors

reminds me of the mansion that I use to work at. this was really well done.

loved it. it catches you from the beginning and doesn't let go. it's truly exciting.

If you could sum up A Midsummer Night's Scream in three words, what would they be?

What does Brittany Pressley bring to the story that you wouldn’t experience if you just read the book?

I way to read the book while driving

Just like R. L. Stine. His books jump right in and stay entertaining. I love reading and listening to his books

Is it worth 1 credit?

What made the experience of listening to A Midsummer Night's Scream the most enjoyable?

I very much enjoyed A Midsummer Night's Scream. The downside is that it is such a short "read."

It's hard to pick one favorite character. All of them were great.

Have you listened to any of Brittany Pressley’s other performances before? How does this one compare?

I haven't listened to any other Brittany Pressley's other performances.

I did like the story, just with it being so short as compared to many other stories I have listened to, it seemed to me like a waste of a credit. Again, a good "read" though.

I scream for your soul

What I love about this book is that R.L.Stine does his best. It's pretty much in the style of his previous books he has wrote before. I like the storyline but it could of been better I think. Also I'm not really happy with the narration and they could of picked a better person cause her voice is very annoying to me. Parts of the books could of been better and it also seems like it's been done before by other people.

not his best work. hard to relate to. not much of a surprise or twist

why? he used to do better. wonder if he got bored with his writing. so dumb.

A girl dies and her idiot friends make toast! Bottom of the barrel for goosebumps author!!