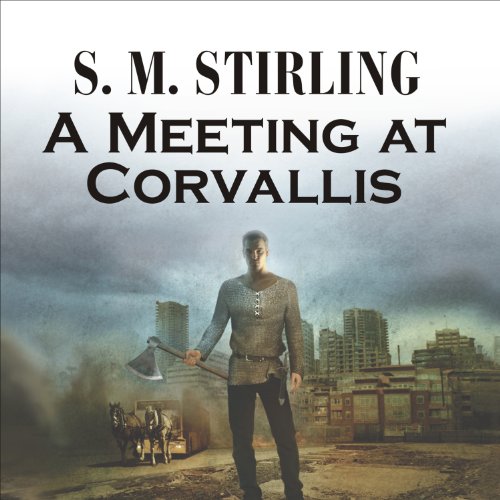 A Meeting at Corvallis

In the 10th year of the Change, the survivors in western Oregon have learned how to live in a world without technology. The city-state of Corvallis has preserved its university, and trade flourishes via riverboats and horse-drawn railways. Under the strong hand of Michael Havel, the Bearkillers hold the lands west of Salem in peace and order. And in the eastern half of the Willamette Valley, the Clan Mackenzie flourishes under the charismatic leadership of Juniper Mackenzie, bard and High Priestess.

Together, they have held the Lord Protector, Norman Arminger - the warlord of Portland - at bay. With his dark fantasies of a neofeudal empire, Arminger has extended his power over much of the Pacific Northwest, spreading fear with his knights, castles, and holy inquisition. Even more dangerous, and perhaps Arminger's most powerful weapon of all, is the ruthlessly cunning mind of his consort, Lady Sandra.

The tensions between these factions have been building for some time, and the only reason they haven't confronted one another on the battlefield is because Arminger's daughter has fallen into Clan Mackenzie's hands. But Lady Sandra has a plan to retrieve her - a plan that threatens to plunge the entire region into open warfare.

What listeners say about A Meeting at Corvallis

The war promised in the previous book does come to pass. Familiar faces return and a few lesser known characters are explored in more detail. Story is split between 4-5 major factions as the action becomes more diverse.

This book seems more "comfortable" with itself and hits the mark promised by the basic premise of the series. Descriptions become a little less repetitive and some characters get a lot more interesting.

Narration is good and addresses some of the more common complaints about pronunciation found in previous books. Could stand to have a slightly longer moment of silence when a scene ends dramatically and before the next scene begins some time later.

A proper end to the first part of the change. I have listened to 7 books in this series and can't wait for the next one "The Sword of the Lady" which is supposed to be released in September 2009 in Audio format. I hope Audible.com has it as soon as it is available. Rudy Mckensie has the best of Mike Havel and Juniper Mckensie and keeps the story line moving ahead. I highly reccomend this series.

I really enjoyed "Dies the Fire" and just had to know what happens to the characters I have come to know and care about. I was fascinated with how human nature and individual character responds to a complete change to everything we know and rely on to survive in our modern day world. "Meeting at Corvallas" is the next chapter to the chaos of the first book, and captured my attention and imagination, however the story seemed to drag out to the end. Oh, wait, it's not over, and now I have to get the next book to finally get closure to the story. When do I get my new credits.....Arrrrrg! I can't wait that long!

The end of a Great trilogy

I really enjoyed this, the third book in the series. If you enjoyed the first two, you will enjoy this one. The author wraps up the trilogy nicely and writes one of the best 'death of a hero' scenes I have read.

Repeated detailed descriptions of the local plants, animals, food, clothing, and locality get a bit tedious and detracts from from a really good story.

very good narration and story but...

The story is great, have really enjoyed the whole series so far and the narrator has a good voice and a way of drawing you into the story, the only criticism I have is that the narrator has a disconcerting habit of mispronouncing some common historical terms, sort of like someone who's been given a script and read the words but not really understood them.
Apart from that its been a really enjoyable listen !

Would you consider the audio edition of A Meeting at Corvallis to be better than the print version?

I can't compare the print and audio versions, except in one area: Print isn't plagued by mispronunciations. The narrator has a good voice, great phrasing and pacing skills, and wonderful character differentiatuon. But, and this is a big problem for me, he consistently mispronounces words. Common words such aa "ballista" and "bared'' get maimed. I don't know enough Erse to know if that's right, but based on what he does to Celtic, Cernnunos and Cuchailin I'm betting it's not. I can't say that the book is destroyed because of this, but it definitely jars the listener badly. I'm seriously thinking of switching to print for the rest of the series.

I like the character development, and that we get to see inside the PPA world a bit.

Learn to pronounce correctly! There's no excuse for these jarring and painful errors in professional work. Why has the editor allowed this through four books?

Good ending to a fascinating story

The Change novels as a whole have been an idea that has fascinated me since the first time I stumbled across them while looking for a good new series. A Meeting at Corvallis is good end to first trilogy of the series. I was left satisfied with the story, and looking forward to what would come later.
What I like most about this series is that it is what would have happened if Tolkien had written a post apocalyptic book.
I like...

Great ending to the initial series

The narration is great and I look forward to hearing what happens with Rudy in the upcoming books.

The story is great!

The narrator is great a doing all the voices, but mispronounces a lot of words. Enough to be mildly distracting. But overall, the story is worth it.