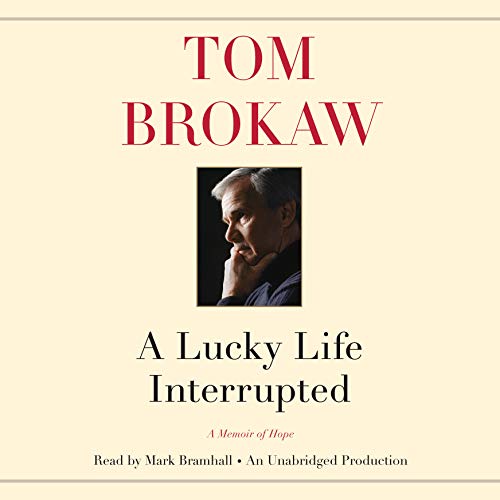 From Tom Brokaw, the best-selling author of The Greatest Generation, comes a powerful memoir of a year of dramatic change - a year spent battling cancer and reflecting on a long, happy, and lucky life.

Tom Brokaw has led a fortunate life, with a strong marriage and family, many friends, and a brilliant journalism career culminating in his 22 years as anchor of the NBC Nightly News and as best-selling author. But in the summer of 2013, when back pain led him to the doctors at the Mayo Clinic, his run of good luck was interrupted. He received shocking news: He had multiple myeloma, a treatable but incurable blood cancer. Friends had always referred to Brokaw's "lucky star", but as he writes in this inspiring memoir, "Turns out that star has a dimmer switch."

Brokaw takes us through all the seasons and stages of this surprising year, the emotions, discoveries, setbacks, and struggles - times of denial, acceptance, turning points, and courage. After his diagnosis, Brokaw began to keep a journal, approaching this new stage of his life in a familiar role: as a journalist, determined to learn as much as he could about his condition, to report the story, and help others facing similar battles. That journal became the basis of this wonderfully written memoir, the story of a man coming to terms with his own mortality, contemplating what means the most to him now, and reflecting on what has meant the most to him throughout his life.

Brokaw also pauses to look back on some of the important moments in his career: memories of Nelson Mandela, the Dalai Lama, the fall of the Berlin Wall, the morning of September 11, 2001, in New York City, and more. Through it all, Brokaw writes in the warm, intimate, natural voice of one of America's most beloved journalists, giving us Brokaw on Brokaw, and bringing us with him as he navigates pain, procedures, drug regimens, and physical rehabilitation.

What listeners say about A Lucky Life Interrupted

Even if we are not Tom Brokaw, we all think we are lucky. Especially if we have good health. We all have colleagues, friends, and family whom we have outlived. And so in some way we confirm our luck every day.
And maybe because most of us never have that1% life our mortality is easier to accept.
Nonetheless I enjoyed this book by my favorite newsman because it is not just all about him but the lives and accomplishments of others, the pitfalls of the American healthcare system and the pervasive All American values that root his soul and shine through his stories and persona. He is the last of the great American newsmen and it is we who are lucky to have had him as a person to tell out story.

More than I expected

I was pleasantly to see this book didn’t just focus on the cancer diagnosis and treatment but also brought in other personal and professional aspects of Tom Brokaw’s life.
Very interesting book.
Happy health to you, Mr. Brokaw.

Thank you for making all of us who listen to this book "lucky" with its presence and story. Thank you for taking the time, energy, and attention to share your "cancer story." It would be easy to say that this is a book about cancer, but it very much is an intelligent, thoughtful, spirited and articulately expressed book about an incredible American journey. For many of us Tom Brokaw has been an incredibly human, honest, trustworthy, and insightful presence in telling America's story through news and he most certainly brought those qualities to relating this life story that all too many face personally and with loved ones.

too much about famous people

as a myeloma patient myself, I hoped for insight on Brokaw's struggles, rather than a story about name dropping, and hiding his disease. I wanted an inspirational story

I began listening to this audiobook and wondered why it's not narrated by Tom Brokaw, himself.

As a cancer patient myself: comments

Brokaw has led a fascinating life but the nitty gritty details of his cancer treatment: seemed more like therapy for him than enlightenment for the rest of us. There was not much inspiration, but a lot of gratitude.

I was surprised how much I shared with Mr. Brokaw as he learned of his diagnosis and treatment of MM. Cancer makes you stop and focus on what is really important in life. Mr. Brokaw made that clear in his memoir. An excellent read on a lucky life. I feel positive about my journey, and was buoyed by Mr, Brokaw’s story.

narration was read by Tom Brokaw. Always loved his voice. learned so much about his life and work.

I was disappointed Brokaw did not narrate his own memoir. It was a good story, but I can't say it was amazing or a powerful message as I had hoped.

the story is great but the narration is not

I personally own every Brokaw book. it needs his legendary voice. Mr Bramball is dry