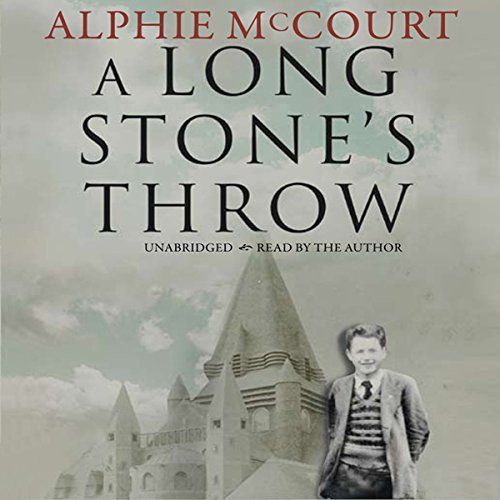 This memoir of the youngest McCourt begins between the borders of Canada and the United States. Because of a technical hitch in immigration law, Alphie, in town to play a rugby match with his mates, finds himself shanghaied in no man's land. This was not the first, or the last, time Alphie will be on unsteady ground.

Alphie McCourt was born in Limerick, Ireland, where his father's departure left misery behind for the family. His loneliness only grew deeper and wider as each of his older brothers (Frank, Malachy and Michael) left for America so in the year 1959, Alphie followed them.

Alphie's adolescence in New York was marked by aimlessness, and too much drink. Briefly returning to Ireland and studying law, he returned to America only three years later, where this time he settled in California, discovering marijuana and Gabriel Garcia Marquez.

Returning to his immigrant roots in New York City, Alphie reencounters the beautiful Upper East Side Lynn,and marries her in 1975, in a raucous ceremony attended by both priest and rabbi. Success followed by hardship in business ventures color several of the following years. Then, one night, on Route 80 in New Jersey, drunk, full of despair and driving through the snow, Alphie has an epiphany.

Today Alphie rises in the morning, at time when he used to go to bed. With a New York City dawn still lingering, he monitors the Empire State Building, in all its moods and colors, and knows he has finally landed on firm ground. He is home.

Loved it! His narration warms up and flows

This is worth sticking with if the initial narration is slower than expected. This is a great one to listen to in quiet surroundings and when you can follow his thread of thought and the richness of his characterizations and descriptions. And if course, tweaking of narration rate can be made within the Audible playback software. Much enjoyed. And the hardships he faced certainly didnt detract from the story. I would rather gain valuable insights from the hardships in an autobiography than read a flowery but less truthful interpretation intended to entertain joyfully.

It'll put you to sleep

I couldn't take it anymore. I had to get a refund. I thought it would give me different view of the McCourt family but it put me to sleep instead.

The story could have been good if someone else read the story. Alfie ruined it. So dull. 😴

I suppose becasue they saw thir brother Frank's literary success, Alphie and Malachy McCourt thought they could do as well. The problem is, they don't have his talent! This book is poorly written warmed over Frank McCourt, only with a lot more discussion of the author's genitals. It plods on and on and on. I wanted this man to frow up, immigrate and live a life of obscurity about an hour into the book.

Alphie did not tell much of a story or reveal much about himself. It is not Frank McCourt, so don't bother with this one.

Mr. McCourt is a good writer and the story flows well. The author's narration of the book detracts from the book because his voice is slow and monotone with little inflection. Although his accent and singing add to the enjoyment of the book, his overall narration brought down the rating by at least one star. With a professional narrator, the book would have come alive.

This is another story from the youngest McCourt brother, Alphie. It is funny in some places but a bit of a snoozer in other areas. I enjoyed Angela's Ashes and Tis by Frankie, the oldest brother but Teacher man and now this one by Alphie are pretty much repetitious and quite honestly, about much of nothing. Still, you can't help but love that Irish accent! That is probably what held me, more than the story itself, until the end.

Alphie is not his brother

if you are expecting something close to the quality of Frank McCourt, you will be sorely disappointed.