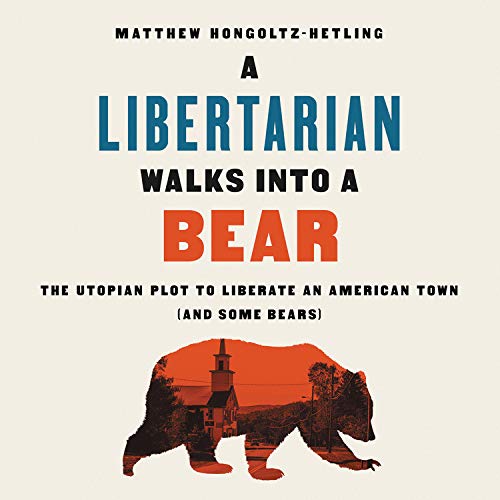 A Libertarian Walks Into a Bear

The Utopian Plot to Liberate an American Town (and Some Bears)
By: Matthew Hongoltz-Hetling
Narrated by: Kevin Stillwell
Length: 9 hrs and 52 mins
Categories: History, Americas

A Libertarian Walks Into a Bear

A tiny American town's plans for radical self-government overlooked one hairy detail: no one told the bears.

Once upon a time, a group of libertarians got together and hatched the Free Town Project, a plan to take over an American town and completely eliminate its government. In 2004, they set their sights on Grafton, NH, a barely populated settlement with one paved road.

When they descended on Grafton, public funding for pretty much everything shrank: the fire department, the library, the schoolhouse. State and federal laws became meek suggestions, scarcely heard in the town's thick wilderness.

The anything-goes atmosphere soon caught the attention of Grafton's neighbors: the bears. Freedom-loving citizens ignored hunting laws and regulations on food disposal. They built a tent city in an effort to get off the grid. The bears smelled food and opportunity.

A Libertarian Walks Into a Bear is the sometimes funny, sometimes terrifying tale of what happens when a government disappears into the woods. Complete with gunplay, adventure, and backstabbing politicians, this is the ultimate story of a quintessential American experiment - to live free or die, perhaps from a bear.

"Matthew Hongoltz-Hetling's wild and wonderful blend of small-town America and large-scale ideals, imparted with humor and insight reminiscent of Sarah Vowell and Bill Bryson, is an unpredictable and endlessly fascinating feat of immersive reporting, filled with singular characters and doughnut-eating bears." (Michael Finkel, best-selling author of The Stranger in the Woods)

"An entertaining sendup of idealistic politics and the fatal flaws of overweening self-interest." (Kirkus)

"Since the beginning, Americans have been fighting about the balance between individual liberty and the common good. Hongoltz-Hetling shows what can happen when one rural New Hampshire town went to the libertarian extreme in this madcap tale that zig-zags between tragedy and farce, with the possibility of being eaten." (Colin Woodard, New York Times best-selling author of American Nations and Union)

What listeners say about A Libertarian Walks Into a Bear

This book feels timely with the current admin's response to the covid pandemic. It's part comedy, part tragedy. And all around fun read.