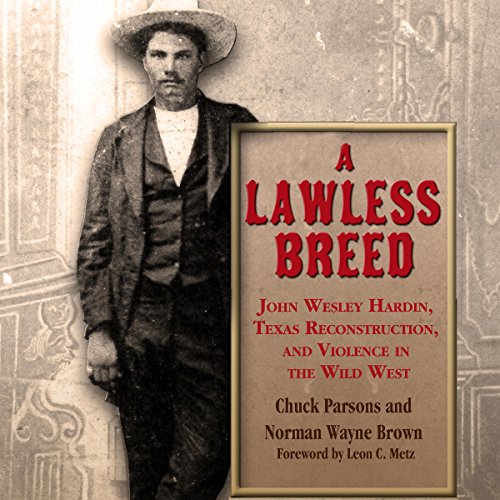 John Wesley Hardin! His name spread terror in much of Texas in the years following the Civil War as the most wanted fugitive, with a $4,000 reward on his head. A Texas Ranger wrote that he killed men just to see them kick. Hardin began his killing career in the late 1860s and remained a wanted man until his capture in 1877 by Texas Rangers and Florida law officials. He certainly killed 20 men; some credited him with killing 40 or more.

After 16 years in Huntsville prison, he was pardoned by Governor Hogg. For a short while, he avoided trouble and roamed westward, eventually establishing a home of sorts in wild and woolly El Paso as an attorney. He became embroiled in the dark side of that city and eventually lost his final gunfight to an El Paso constable, John Selman. Hardin was 42 years old.

Besides his reputation as the deadliest man with a six-gun, he left an autobiography in which he detailed many of the troubles of his life. In A Lawless Breed, Chuck Parsons and Norman Wayne Brown have meticulously examined his claims against available records to determine how much of his life story is true, and how much was only a half truth, or a complete lie. This deeply researched biography of Hardin and his friends and family will remain the definitive study for years to come.

"A Lawless Breed will likely become a classic." ( True West)
"Readers of gunfighter lore will embrace this fine biography, and so will Texans in general." (Bill O'Neal, author of The Johnson-Sims Feud)

author should not write about who he hates. portraying hardin as a liar in this whole terrible book.
narrator was really bad as well..

According to these authors, nearly everything John W. Hardin said was a lie. Wish Mr. Hardin was still alive so you could have called him a liar to his face you fearless Ink-slingers. Don't think you'd have the guts.

Which character – as performed by Jim Sartor – was your favorite?

All of them, he is so talented!

A Lawless Breed: John Wesley Hardin, Texas Reconstruction, and Violence in the Wild West
Written by: Chuck Parsons , Norman Wayne Brown
Narrated by: Jim Sartor
This book really intriqued me. I knew very little about John Wesley Hardin and boy did this open my eyes. What little I thought I knew was all wrong. He had quite a life! Wow, everytime I read about these characters during the old west and civil war times I am just astonded that any of them lived very long at all the way they acted and behaved! The wounds and injuries that the indured, I am so surprised more didn't die of infection. This book really went deep into the lives of John, his friends, family, places he lived, his crimes, the ones he was accused of, family, and more. Wonderfully detailed. I didn't get lost at all, shock! Easy to understand and follow. I looked up the images of him on the internet and the younger Hardin was quite a looker! Too bad he was such a heartless killer.
This was an audible book I requested and the review is voluntary.
The narrator was awesome. He made listening to this book a real joy. He was able to do so many different voices consistently and with such distinction that I could recognize the different voices as who they should be. These voices added a realism to the story.

I would recommend this to any friend who is fond of westerns. I am very interested in westerns, both fiction and non. This one did not disappoint.

He was a good narrator, good flow, easy listen.

It was an entertaining biography.

I was voluntarily provided this review copy via Audiobook Boom at no charge by the author, publisher and/or narrator.

I received this book free from ebalst, and this is my unbiased opion. Everything you wanted to know about Hardin. a little dry, if you're doing research definitely worth a listen

very enjoyable dipscription of this historical outlaw. factors and situations that are widely unknown of his life and legacy.

I received a free copy of this book and voluntarily decided to review."

No, too disjointed in its chronology of events.

A mystery or suspense audio.

Was A Lawless Breed worth the listening time?

No, couldn't make it to the end.

A fascinating look back at a notorious name from history.

No Man Round Who Could Track or Chain Him Down

If you could sum up A Lawless Breed in three words, what would they be?

Quite obviously "John. Wesley. Hardin". This is his story. From childhood, til his death. Thorough, detailed. Some might think too detailed. I enjoyed the minutiae. It was
historic biography presented in an interesting conversational method.

What other book might you compare A Lawless Breed to and why?

The book "Shot All to Hell" by Mark Lee Gardner. About the James and Younger gang and the Northfield, Minnesota robbery and aftermath. That worked came into my mind often while listening to "A Lawless Breed".

Which character – as performed by Jim Sartor – was your favorite?

I liked most of his story narrative work. I didn't care so much for his voice for individuals like Hardin. Overall, very good performance though. An "A -".

Since the review is titled after "John Wesley Hardin(g)" by Bob Dylan, I'm looking at "Knockin On Heaven' Door".

This was a very good biography with a lot of social, geographical, and political insert that fleshed out the story. Some reviewers of the print version felt that was a negative. I enjoyed it immensely. Scholarly, informative but done in a very enteraining way.

Thank you for the opportunity to review this title!