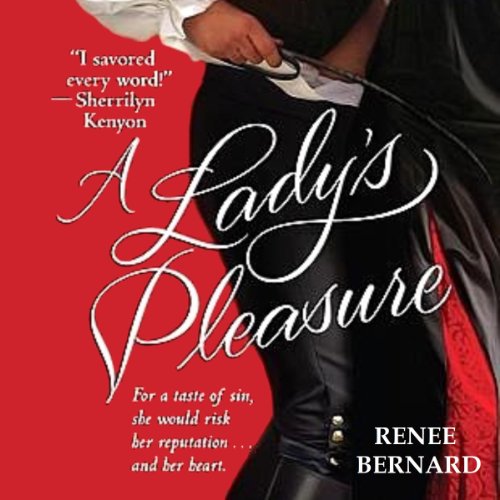 Seeking revenge, she discovers how delicious a case of mistaken identity can be…

Merriam Everett has always been regarded as a shy, docile creature. But for one night, Merriam the Mouse has become a temptress who will recklessly take her pleasure with the arrogant earl who once slighted her, and then leave him aching with lust. A fine plan, if Merriam had not just seduced the wrong rogue!

Drake Sotherton left England amid dark speculation and has returned to seek vengeance against Julian Clay, the man he believes murdered his wife. Convinced that the masked beauty who seduced him is Julian's pawn, Drake tracks her down and proposes that she become his mistress for the Season. Every sensual desire, every secret longing will be explored...and fulfilled.

But keeping his enemy close is a dangerous game. Merriam is an irresistible mix of innocence and abandon, and each encounter proves more soul-searing than the last. With a passion this wild, this wonderful, one season will never be enough…

What listeners say about A Lady's Pleasure

I listened to this audiobook during a long couple days of commuting, it was narrated by Michaela James. She is the best narrator I've ever heard for an ebook, she was like a one-person play! She was dramatic and used different voices very skillfully, I especially enjoyed it when she changed her voice for the nosy busy-body Mrs. Skelton and between the men, maids, footmen and Mirium during the dramatic denouement.

Mirium is a widow and has been called a mouse, a nickname she chafes at. She has secretly been visiting a courtesan friend and been instructed on the arts of love. She is awed by the sheer male beauty of the Earl Julian Clay, but she wants to teach him a lesson, and prove something to him. Julian Clay was overheard disparaging Mirium to another man, saying that he would never have anything to do with mouse like females or widows.

Drake Sutherton, the Duke of Sussex, has returned to England after being away for 8 years after the murder of his wife. Rumors abound that he actually murdered his beautiful wife Lily, but Drake thinks that Julian Clay murdered her, as Julian had been her lover and has been present when her body was found. Drake wants to get revenge on his former friend.

So Mirium's plan is to entice Julian to her at a masquerade ball (she found out he would come as the Wizard Merlin) and flirt with and tease him and leave him wanting (with a case of blue balls). Unfortunately, another man at the ball is dressed as Merlin, and she seduces the wrong man, but it goes a *bit* farther than she planned, and she is experiencing a headlong rush into uncontrollable passion.

The next part of the story seemed to be all about sex. Drake must find out who seduced him at the ball, and driven by loneliness and desire, he tracks down Mirium, he is hot to have her again. They then resume their passionate intimate acquaintance further, alot further, and Drake convinces Mirium to be his Mistress for the rest of the Season. He will shower her with jewels and clothes and treat her like a queen. She agrees.

Drake grows to appreciate Mirium and visa versa. They are falling in love. Their emotional connection is sweet and deep and beautiful.Then came the dramatic conclusion of the story, the mystery of who murdered Drake's first wife is solved, and the lovers come to their understanding. The denouement is very satisfying and all the pieces fall into place. The narrator made it very exciting and dramatic!!

No. I would recommend listening to it over several sittings.

Loved it for what I was not expecting!

Would you consider the audio edition of A Lady's Pleasure to be better than the print version?

Yes, I would liked to have followed along while I was reading it.

I personally liked Drake. He was a mysterious man who was plotting and scheming and deeply hurt. I kind of related to him a little.

I liked how she gave Miriam a soft spoken voice. It really gave to her character.

What the book "snippet" doesn't tell you is that this is an erotica. It is extremely vivid. However it gives into the passion which Victorian England didn't want to show. Very good over all.

Yes, makes for a nice evening for couples. Love the narration and the narrators voice matchse the content of the book

Her lively narration style and accent enhanced the story line and listening pleasure.

Drake Sotherton, the Duke of Sussex leaves England years ago under suspicion of the murder of his wife and returns as the "Deadly Duke." His best friend, Julian Clay, the Earl of Westleigh, who seems to have been involved in some way with his ex-wife's death and also was the main accuser of pointing to Drake as her murderer, are involved again in a struggle over a woman. This time it is Merriam Everett, a plain widow, who overhears Julian make a comment about her being a "whey-faced widow." She seeks the guidance of a famous courtesan and changes herself into a luring beauty in order to attend a masquerade ball and lure Julian into a evening of unforgettable sex and then leave him wanting. A change of costumes and mistaken identity cause Merriam instead to have an evening of passion with Drake, who has no idea about Merriam's plan, and wants nothing more then to find this sexy beauty after this unforgettable evening of intense pleasure. He discovers there is some connection with her to Julian and takes the wrong meaning of the connection and decides to take her as a mistress and use her as a means for revenge. Merriam agrees only because she is drawn to Drake, not knowing what is going on around her and that danger is building. As the eroctism and danger increases, the mystery unfolds to an intense and surprise ending. Renee Bernard's story and character development and ability to create a well-developed story around well-written, passionate, erotic sex scenes is perfection. This story has the main ingredient for intense passion - vengeance. A truly pleasurable read and a book difficult to put down. I am looking forward to many more erotic historicals by Renee Bernard.
Michaela James was great with the narration of the story

This book is more than half sex.... just a warning.
Verrrry hot stuff!

Goodness what an awful narration!

The narrator broke every sentence down to many parts.
One of the worse
Books narrated
For sure
This is exactly how she read each sentence. Chopped up to many parts. I would have given this book a 5 if not for that. Otherwise it had great sex and good story

I love a well written sex scene, this book didn't even make the sex titilating...

The story line is just silly. Too bad. This could have been a great book.