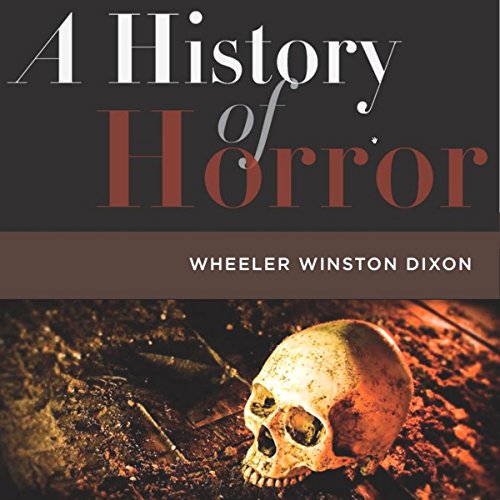 A History of Horror

By: Wheeler Winston Dixon
Narrated by: Aaron Henkin
Try for £0.00

Ever since horror leapt from popular fiction to the silver screen in the late 1890s, viewers have experienced fear and pleasure in exquisite combination. Wheeler Winston Dixon's A History of Horror is the only book to offer a comprehensive survey of this ever-popular film genre. Arranged by decades, with outliers and franchise films overlapping some years, this one-stop sourcebook unearths the historical origins of characters such as Dracula, Frankenstein, and the Wolfman and their various incarnations in film from the silent era to comedic sequels. A History of Horror explores how the horror film fits into the Hollywood studio system and how its enormous success in American and European culture expanded globally over time.

Dixon examines key periods in the horror film - in which the basic precepts of the genre were established, then banished into conveniently reliable and malleable forms, and then, after collapsing into parody, rose again and again to create new levels of intensity and menace. A History of Horror brings over 50 timeless horror films into frightfully clear focus, zooms in on today's top horror Web sites, and champions the stars, directors, and subgenres that make the horror film so exciting and popular with contemporary audiences.

"Dixon is recognized as an eminent film scholar and the current title is an impressive addition to his oeuvre. This book certainly has solid scholarship, but it is also a book that once picked up is hard to put down. Essential." ( Choice)
"This concise overview is an informative and entertaining read. Recommended." ( Library Journal)
"This is an excellent survey of horror movies...full of fascinating information and is delivered in an accessible manner. Required reading for horror fans." ( Booklist)

What listeners say about A History of Horror

This is a fairly comprehensive run through of horror movies...I do have to say though that ( at least at the start) the intonation of the narrator was ...odd. It reminded me of a bizarre cross between a robot and Captain Kirk himself,William Shatner(!)
For all that a good book and worth a go!

well researched and entertaining, this book reads as if the author cut a two paragraphs from the Wikipedia article of every major horror movie and only briefly touched on any of them. as an overview not bad and still entertaining but again just brief tidbits of information that most horror fans already know just on the reputation of the movies and their creators

I am a "scary movie" fan and I was looking forward to a book that explained many of the thematic underpinnings of horror movies and the evolution of those themes from the very early horror through the modern horror movie. What I got was a list of ever horror movie ever made and a short synopsis of each. It was incredibly boring. At first I thought that perhaps the author wanted to give appropriate background on all the films before getting into the heart of the subject matter. But no, there was no scholarly analysis of the subject matter at all.

Author is NOT a Horror Fan

Author thinks we need more movies like the Twilight series and less movies like John Carpenter's The Thing. I don't know of any horror fans who would agree.

It's questionable whether or not he's seen the movies he criticizes the most. He doesn't always get the facts about characters or the storyline correct.

Theoretically the book is organized in chronological order; however, the near the bounces all over the place and feels chaotic. he jumps from the 60s all the way in to the 2000s, leaping all over the place without concern for consistency.

In addition, he is inconsistent about spoilers. Sometimes he spoils everything,. Sometimes he gives a little plot information, but mostly hints at where the story is going. Sometimes he just lists the a bunch movie titles wiithout any description at all. He's unpredictable.

One other thing, he frequently starts sentences using words like, "Indeed." There's a lot of purple prose - stuff that feels somebody got a thesaurus for his birthday.

A wealth of Horror facts

Extremely comprehensive without being derivative. Deeply detailed without ever being boring. The cadence of the narrator kept my attention as he emphasized all of the historical tidbits, and although the author may be a little too harsh on some fims, he was phenomenal in presenting a buffet of information.

I found this book to be an enjoyable read. It takes you back to the beginnings of horror all the way up to current. For every era several movies are mentioned with a synopsis and an comprehensive theme for the time. It can lag in parts, if you are not a fan of that generations movies, but overall it's a fun read. Narrator does a great job.

Great information for anyone into the genre! gets a little opinionated at the end, but otherwise he sticks to the facts pretty well.