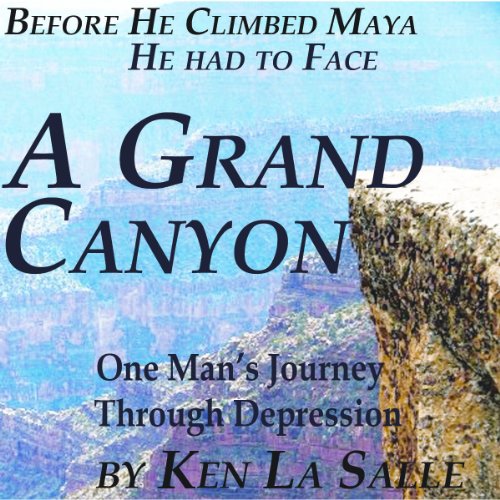 Before Climbing Maya, author Ken La Salle had to face A Grand Canyon, a wasteland of depression, doubt, loss, and misery. Now, in this slightly-abridged audiobook, Ken shares his story with honesty, an open soul, and his trademark wit.

In September 2002, Ken left his home and drove to the Grand Canyon to kill himself. The only life he'd ever known was little more than a shambles. He'd lost his wife and now he realized that he really couldn't live without her. His choices were to either continue facing it with self-destruction, drugs, and booze, or...a running start and a jump over the edge to end it all.

Ken's story is filled with dysfunctional families, love found and lost, breakups, breakdowns, and remarkable hope. It's the true story of a man lost without love and too destroyed to think he deserves love. But the most amazing part of the story isn't what set him on the road to the Grand Canyon, it's what happened...afterward.

What was most disappointing about Ken La Salle’s story?

This is a story about a drug user, a drunk who cannot get over a woman who abuses him, steals from him, and even does an unthinkable act to destroy their marriage and family.

If you want to hear a disappointing story about a pathetic guy, this is for you. Otherwise don't waste your time.

Would you consider the audio edition of A Grand Canyon to be better than the print version?

Most definitely. Hearing the author read this real life story is very engaging.

How deeply personal it is. You feel like your right there with him.

Have you listened to any of Ken La Salle’s other performances before? How does this one compare?

Yes, they are all excellent. In this one he takes your the hand and leads you into his world.

Yes, on his drive, the emotions he goes through on his personal journey. It's very powerful and personal, yet he holds nothing back.

This book is deeply personal. He doesn't hold back. He tells it with wit and humour yet it's still powerful. A MUST read!! You'll laugh, cry and cheer. All the while feeling like your sitting right next to him. When your done, you'll be wanting to what happens next!