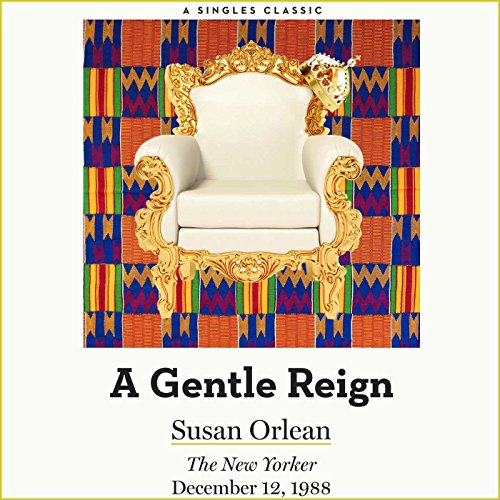 Kwabena Oppong, who is the king and supreme ruler of the African Ashanti tribespeople living in the United States of America, has a throne in his living room. The American Ashanti king is elected every two years from the ranks of an Ashanti social and cultural organization called the Asanteman Association of the United States of America, Inc. The first stateside king, Kwadwo Tuffuor, was a plumber. The second, Kusi Appouh, repaired air-conditioners and refrigerators. Kwabena Oppong is the third king; he drives a cab.

In A Gentle Reign, Susan Orlean, author of The Orchid Thief and Rin Tin Tin: The Life and the Legend, lends her wry, exuberant voice to the unforgettable portrait of an ordinary man thrown into an extraordinary circumstance and follows closely as the newly crowned supreme ruler navigates his life as an unlikely king.

A Gentle Reign was originally published in The New Yorker, December 12, 1988.

I have long enjoyed Susan Orlean’s work on the page, but now realize she’s a good “listen” also. An excellent article.