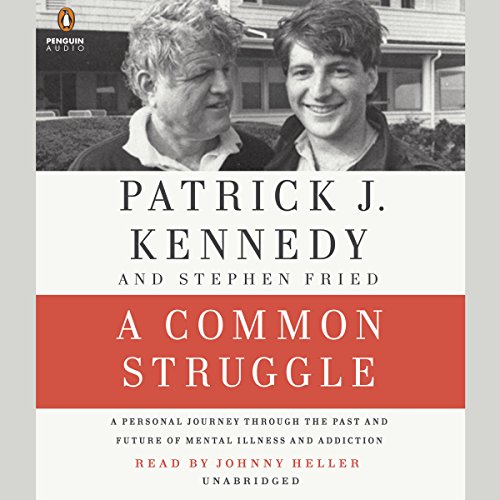 In this New York Times best seller, Patrick J. Kennedy, the former congressman and youngest child of Senator Ted Kennedy, details his personal and political battle with mental illness and addiction, exploring mental health care's history in the country alongside his and every family's private struggles.

On May 5, 2006, The New York Times ran two stories, “Patrick Kennedy Crashes Car into Capitol Barrier” and then, several hours later, “Patrick Kennedy Says He'll Seek Help for Addiction”. It was the first time that the popular Rhode Island congressman had publicly disclosed his addiction to prescription painkillers, the true extent of his struggle with bipolar disorder and his plan to immediately seek treatment. That could have been the end of his career, but instead it was the beginning.

Since then, Kennedy has become the nation’s leading advocate for mental health and substance abuse care, research and policy both in and out of Congress. And ever since passing the landmark Mental Health Parity and Addiction Equity Act - and after the death of his father, leaving Congress - he has been changing the dialogue that surrounds all brain diseases.

A Common Struggle weaves together Kennedy's private and professional narratives, echoing Kennedy's philosophy that for him, the personal is political and the political personal. Focusing on the years from his "coming out" about suffering from bipolar disorder and addiction to the present day, the book examines Kennedy's journey toward recovery and reflects on Americans' propensity to treat mental illnesses as "family secrets".

Beyond his own story, though, Kennedy creates a roadmap for equality in the mental health community and outlines a bold plan for the future of mental health policy. Written with award-winning healthcare journalist and best-selling author Stephen Fried, A Common Struggle is both a cry for empathy and a call to action.

"Johnny Heller's narration of this audiobook captures Kennedy's isolation as he struggled with alcoholism, drug addiction, and bipolar disorder in plain sight. Heller's skillful narration is complete with a dead-on Boston accent...through Heller's outstanding narration listeners can experience his triumph over his addictions and ultimate recovery." (AudioFile)

“A stunningly unvarnished portrait of one of America’s most private public families...." (People)

“I, am personally, really proud of Patrick. I think what he’s doing is consistent with everything that my family has stood for...he needed to start that journey by telling his own story of mental illness. I think it’s noble, and it’s heroic, and I have nothing but admiration for him.” (Robert F. Kennedy Jr. on Ring of Fire radio)

What listeners say about A Common Struggle

Patrick Kennedy's story wrapped within that of his parents and extended family is one in common with so many not as famous or advantaged. The lives of the Kennedy's are tabloid popcorn so that is of interest but this book educates us about the many forms of brain illness- alcoholism, drug addiction, mental illness and post traumatic stress. Patrick turned his personal illness, a "lemon" into lemon aid, a life's work for mental health parity.

Very informative with a narrator's voice that's very easy to listen to. I knew there could be so much to learn from a writer who has the disorders, has had to cope with difficult family members and would be open and honest about how he has learned to cope and succeed, in spite of it. Patrick is a very brave and highly sensitive soul, spirit to those around him. He's done awesome work for us all.

For much of this memoir, Kennedy comes across as a spoiled rich kid, blaming his family for his problems (a serious mental illness and a series of addictions) but in the last chapters he finds redemption and a new life as a (more or less) ordinary person in an ordinary family.

The fact that he has become an advocate for mental health/addiction and physical health coverage parity. I also appreciated seeing evidence that he finally grew up.

Would you listen to another book narrated by Johnny Heller?

Not unless it was another book by a Bostonian.

What else would you have wanted to know about Patrick J. Kennedy and Stephen Fried ’s life?

The writing is uneven and needed better editing.

With all its faults, it's worth reading.

Absolutely! Already have re-tweeted, re-posted many times. I'm in recovery & I felt like he did a brilliant job of respectful representation.

I have often searched for books by and about people in recovery and have usually found that, either, they didn't actually "work" the program & are full of misinformation. Or, they are just trying to exploit what did not work for them as a way to get a "book deal" - bad motives. Kennedy did neither of these. He was always respectful of the "anonymity" factor in our traditions, and, told his own experiences with humility.

Have you listened to any of Johnny Heller’s other performances before? How does this one compare?

A little of both - happy tears that FINALLY - the country is having a conversation about this deadly disease that is killing our kids. Now, maybe we can truly begin to get past the stigma of it all and get on with the solutions!

I would encourage ANYONE that is either fighting their own demons, or, that knows someone who is to read this book. Great gift!!

Fascinating read for a person in recovery and/or with "mental illness". The history of the battle for mental health parity legislation is dull but reveals how and why some laws get passed (quite sad, actually). Peter S.

As a Bipolar patient...

I was recently diagnosed with Bipolar 2 disorder. While I don't suffer from a "normal" addiction to drugs or alcohol, I do suffer from compulsive and addicting behavior. This book was incredibly poignant and I learned so much about the mental health system. Not only did I listen to it on Audible but I also bought multiple hard copies for friends, family members and one for myself. This will be a book I read way more than one time! Thank you Mr. Kennedy!

every family should have this book

it really help you understand addiction and be an advocate on behalf of the mentally ill.

As a fellow struggler w/ bipolar illness, I appreciated the personal stories of Patrick and his family members. At times I got lost in all the politics (though appreciative of his efforts). I wanted to fast-forward to the non-political narratives!

Not what i was hoping

I thought this was going to be about his struggles with mental illness. Instead I found it to be a book about politics and make dropping

Patrick told his story openly and honestly and his work is changing the way America sees mental health and addiction issues.