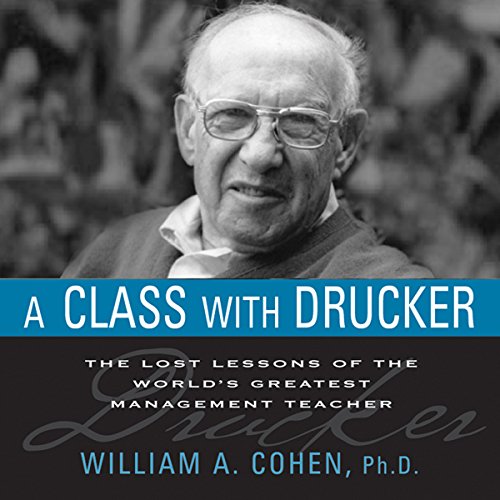 A Class with Drucker

Long considered the world's greatest thinker and writer on management, Peter Drucker's teachings continue to inspire leaders everywhere. From 1975 to 1979, author William Cohen studied under the Great Man and became the first graduate of his doctoral program. What Drucker taught him literally changed his life. In a matter of a few years, he was re-commissioned in the Air Force and rose to the rank of major general. Eventually, he became a full professor, management consultant, multi-book author, and university president - while maintaining a nearly lifelong friendship with the master.

In A Class with Drucker, Cohen shares many of Drucker's teachings that never made it into his countless books and articles, ideas that were offered to his students in classroom or informal settings. Cohen expands on Drucker's lessons with personal anecdotes about his teacher's personality, lack of pretension, and interactions with students and others. He also shows how Drucker's ideas can be applied to the real-world challenges managers face today. Enlightening and intriguing, A Class with Drucker will enable you to gain from the timeless wisdom of the inspiring man himself.

What listeners say about A Class with Drucker

Not fun to listen to

I didn't finish the book because I couldn't stand the lip smacking and the stuttering of the author- can't he please hire someone who actually reads well? I'm sure the book has good content but it's not worth it to me to suffer through it.

I recommend this book for it's content but it can be very challenging listening to the author struggle to read it. Very dry and lifeless.

After 4 hours of listening, I had to give up on the audio version of this book as I could no longer stand the author's narration. He seems surprised by his own sentance structure, mumbles words, stumbles often, and seems to lose interest while reading his own material. I borrowed the print version from my local library, which made it easier to skim and focus on relevant sections.

This author clearly used the Drucker name to attract attention. However, he does a poor job at adding any previously unknown Drucker wisdom, and instead uses this as a platform to bring his own additions as a "Drucker Disciple." This is not what is promised in the title. Personal anecdotes on Drucker classes and relationships can be intersting.. but in this case, the add no color to the interest in Druckers limited personal history. The Author also tries to connect ideas with modern examples, almost none of which have a clear connection to Drucker... and they often have only a casual inference to the idea and ramble on to boot.
In addition, the audio performance is miserable, as the author stumbles through his own material. There are other books on Drucker that far surpass this in content and focus.

Early in the book, but not impressed so far

What disappointed you about A Class with Drucker?

The author is a poor narrator. The first 40 minutes were more about the author than Drucker.

Have Morgan Freeman read the book. :-)

Would you be willing to try another one of William A. Cohen’s performances?

will likely stop listening and just buy the real book.

Inspiring and a Great Listen

It was so inspiring to hear Drucker's ideas and insights as well as so many personal anecdotes about this marketing genius.