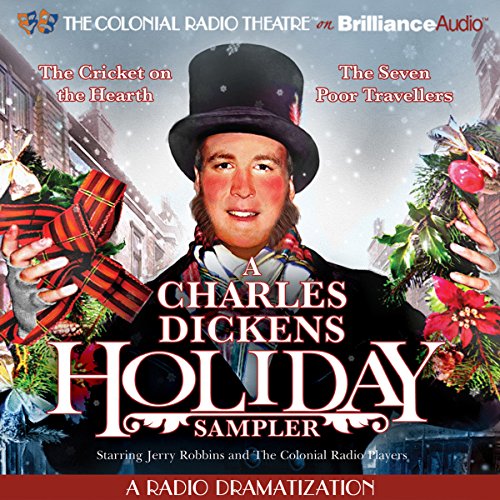 The Cricket on The Hearth was first published in 1845. A cricket constantly chirps on the hearth and acts as a guardian angel to the Peerybingle family. The arrival of a mysterious stranger threatens to shatter this harmony. Does the cricket have supernatural powers? Does he restore faith and overcome suspicion? A masterful story of love and loyalty, The Cricket on The Hearth is effused with the spirit of the season.

The Seven Poor Travellers was first published in 1854. On Christmas Eve, a traveling gentleman happens upon a house in a quaint little village, which houses up to six travelers each evening. He decides to treat them all to a Christmas dinner and tells them a story around the fireplace about a soldier who finds the true meaning of forgiveness and redemption. A sparkling holiday gem from the great Charles Dickens.

What listeners say about A Charles Dickens Holiday Sampler

These two Dickens plays written by the great man to listen to as we sit by the open fire on Christmas Eve, are enjoyable for any time of the year.

There are no best moments both are great performances.

Full cast professional productions, both plays are well acted with a lovely soundtrack set in the old fashioned Victorian era. These may not be to everyone's taste as they appear old fashioned but then this is supposed to be the whole point. Dickens represented 'Old times past'.