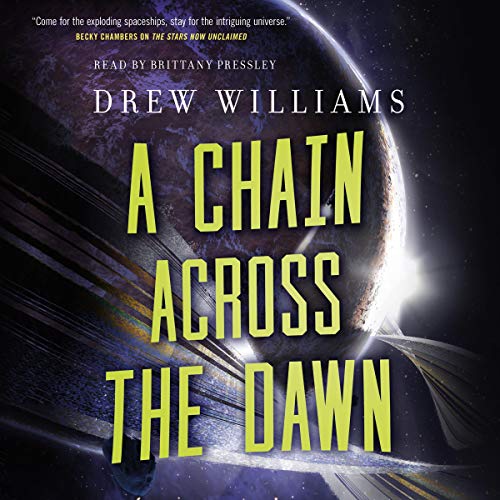 A Chain Across the Dawn

A Chain Across the Dawn

Drew Williams continues the Universe After series with A Chain Across the Dawn, an epic space opera chase across the galaxy with witty banter, fantastical planets, and a seemingly unbeatable foe.

It’s been three years since Esa left her backwater planet to join the ranks of the Justified. Together, she and fellow agent Jane Kamali have been traveling across the known universe, searching for children who share Esa’s supernatural gifts.

On a visit to a particularly remote planet, they learn that they’re not the only ones searching for gifted children. They find themselves on the tail of a mysterious being with impossible powers who will stop at nothing to get his hands on the very children that Esa and Jane are trying to save.

With their latest recruit in tow - a young Wulf boy named Sho - Esa and Jane must track their strange foe across the galaxy in search of answers. But the more they learn, the clearer it becomes - their enemy may be harder to defeat than they ever could have imagined.

The story is good, fun characters, fast plot, lots of action. But.... what makes this listening experience exceptional is the narrator. She took it to the next level. Each person, place or thing had its own voice, feeling and atmosphere. The next search I make will be for Brittany Pressley. Who ever picked her to read this book should get a promotion.