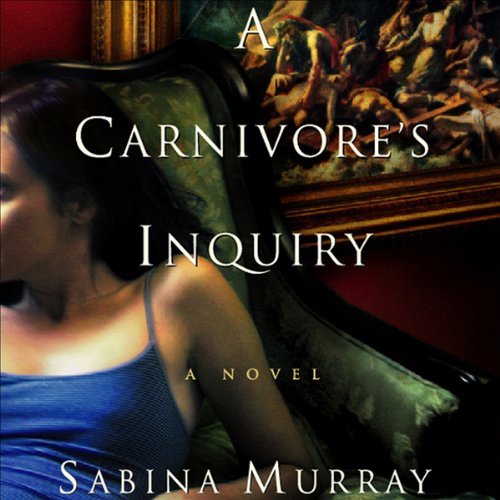 By: Sabina Murray
Narrated by: Wendy Hoopes
Try for £0.00

When we meet Katherine, the winning, and rather disturbing, 23-year-old narrator of A Carnivore's Inquiry, she has just arrived in New York City. She strikes up an affair with a middle-aged Russian emigre novelist she meets on the subway, and almost immediately moves into his apartment. Soon restless, she journeys across the United States and into Mexico, trailed everywhere she goes by a string of murders.

As the ritualistic killings pile up, Katherine comforts and inspires herself by meditating on cannibalism in literature, art, and history. She ponders subjects as diverse as the Donner Party, the fall of Dante's Count Ugolino, and the true story behind Gericault's The Raft of the Medusa. As the story races toward its frightening conclusion, Katherine, and the reader, close in on the true reason for her fascination with aberrant, violent behavior.

A shocking and enlightening modern Gothic novel, told in highly intelligent prose, A Carnivore's Inquiry is a sly, unsettling, subtle commentary on 21st century consumerism and the questionable appetites that lurk beneath the veneer of civilization.

"Mesmerizing....More than the story of one deranged woman's obsession, the novel and its brilliant subtext hint at the ways American society devours the weak, while building a case for a blood hunger in human nature." (Publishers Weekly)
"Pursuit of the flesh reaches prickly proportions in this seductive thriller by PEN/Faulkner-winner Murray....Not for the easily queasy, this is a dark meditation on the vagaries that dwell beneath civilization's veneer." (Booklist)

What listeners say about A Carnivore's Inquiry

Darkly funny, literate and well-paced, A Carnivore's Inquiry was a pleasant surprise -- much better than I was expecting it to be. The reader was absolutely pitch perfect for narrator Catherine and did an excellent job not only differentiating the other characters, but communicating the essence of each. (In fact, this is one of the best read audiobooks I've ever listened to.)

The only negative is that there weren't many surprises, but this was due primarily to the fact that the book description was more revealing than necessary. In other words, you know where it's going, but in this case, the getting there was worth it!

The publisher's book description and many professional reviews all present this as a novel of ideas. Don't be deceived! It's primarily a suspense novel with the thrilling bits you normally expect in a suspense novel ripped out and replaced by the narrator's musings on cannibalism in Western art, folklore, and history. And, as unlikely as it sounds, this is its main strength.

While these inner stories of desperate adventurers and hungry gods are themselves quite enjoyable, it's the frame story, Katherine's ramblings around the US and (too briefly) in Mexico, that fall flat. The themes that are purported by some reviewers to tie these reflections together are all but absent in the main storyline, where the majority of events center around the narrator meeting a random man, drinking far too much liquor, then blacking out.

All of the characters, save perhaps Katherine, Boris, and Anne, seem motiveless and underdeveloped. Of course, since the reader only sees these characters through the lens of the disturbed, solipsistic narrator, one could argue that this is a purposeful technique used by the author to illustrate Katherine's schizoid lack of affect. Intentional or not, these half-formed secondary characters make for drab reading.

Murray is obviously skilled, and some parts of her story are quite compelling and a bit creepy. However, this book is not a true thriller, since it completely lacks a building tension released by action. Neither is it a novel of ideas, since the only idea that receives rigorous treatment is that some people crave the juicy meat of the long pig. Instead, to its detriment, this book is stuck somewhere in between. In the hands of a less skillful writer this story would have turned out dreadfully. As it is, "A Carnivore's Inquiry" is an entertaining but forgetful read.

A nice little surpise of a story

If you enjoyed either the "Da Vinci Code" and "The Memory of Running" then you'll likely enjoy this story very much. The Critics reviews are very exact, and without revealing too much about the story here- its a unique read in general - plays out very differnt from many stories - but comes together very nicely. Intelligent and Engaging

Where does A Carnivore's Inquiry rank among all the audiobooks you’ve listened to so far?

in my top 25, I love too many long series....but it would make my list no matter what

What was one of the most memorable moments of A Carnivore's Inquiry?

wouldnt want to spoil it for the rest of you...

I cant say too much, it would ruin the surprise. it is worth a listen and get over the readers voice, by the end you will understand her vocal choices...