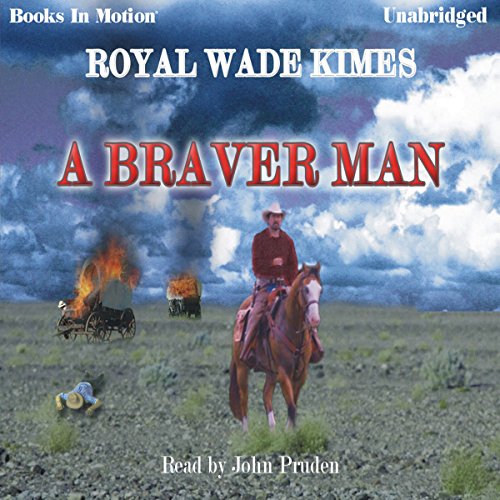 Hawk Haynes ruled from his heart, but stayed alive by using his instincts. Hawk was on his way to start a new life in Texas when he runs into burned out wagons. He finds families slaughtered, the men killed, the women raped, and killed. Hawk Haynes had just introduced himself to Southwest Texas.

Hawk had been deeded land just northwest of Rawlins for his services in taking care of Ted Rawlins and his wife until their death. According to Ted, the property he deeded to Hawk was prime land. According to what Hawk saw while traveling, it was anything but prime. It didn't look like it could grow grass, but it could grow outlaws, gunfighters and murderers. That made it easy for a man like Sid Rawlins hire all the ruthless men he needed to him solve his problems. Hawk and Rawlins will lock horns and A Braver Man will be crowned.

Excellent book! Well written with a good story and lots of action. This is a role for John Wayne if he were still with us. I hope Mr. Kimes keeps them coming.

The good guys too good the bad guys too bad. A schoolboys opinion on patriotism, God, and the Civil War. The hero is too fast, too tough, to be believed. This is a 17 hour penny dreadful.

All the stereotypes of the most predictable Western stories are there... Really boring to the extreme.

Good Thing It's A Long Story...

I didn't want it to end. I have exhausted L'Amour, and I miss him. Finally here at last is a Western novel that is on par with L'Amour's best ones. It contains nice twists and turns, and a touching ending.

Dear critics: Look, guys, this isn't SUPPOSED to be Tolstoy. The goal is an enjoyable Western novel with good characters and interesting situations. This is precisely that. And I am glad that it's long. Bring on more!

I'm a huge western fan and like the subject matter but there is so much "filler" like describing every plant or wrinkle on a face that it just isn't enjoyable at all. I had hoped that it would get better after 3 chapters but it was still the same stuff.

The narrator is just ok but I don't think he's suited for Westerns. The dialect or "slang" is just too forced and there really isn't any emotion in his voice.

I returned the book.

surprises me that this was ever published. My 12 year old writes better stories. I sometimes wonder how these things get sold to dummies like me. Oh well.

This book got LONG to listen to. It was pretty easy to figure out the end, and so many shootings!

Cool hand Luke liked it better than the Sacketts, which they seemed to have some pretty far fetched gun battles just far from being true, can you believe that bullet hit a twig and bounced around etc, and Braver Man didn’t seem to have those miraculous events in every chapter..
My opinion of course.