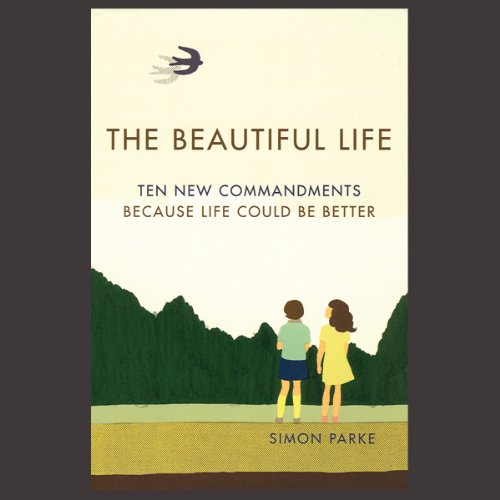 The idea for the book came to Simon Parke while on a train from Edinburgh to London. He had been leading a weekend on the Old Testament's Ten Commandments, and felt uneasy. What had struck him, was the fact that while the commandments demand that we be good, they don't tell us how to be good. 'They tell us what to do,' says Parke, 'but not how to be - and how to be is the more important of the two, as all our doing arises from our being. Much psychological discomfort stems from the unbridged chasm between the two.'

So The Beautiful Life - Ten New Commandments Because Life Could Be Better is a book about being, rather than doing, and seeks the lost or forgotten human power of extracting the pure energy of the soul from the experiences of daily life.

The Ten new commandments presented are:

It is tough-mindedly mystical, in its commitment to our twin realities of compulsive behaviour and original and recoverable beauty.

Simon Parke was a priest in the Church of England for 20 years, but holds back from too much talk of God. 'God has become a difficult word through misuse,' he says. 'Too often, those who use it cannot accurately describe themselves, let alone an infinite other. Like chimney sweeps handling clean linen, they soil what they touch. It is best first that we notice ourselves.'

What listeners say about A Beautiful Life

a soothing yet enlightening audio book

a lovely delivery by the author, overall I would say this book goes a long way to promote wholeness, grace and inner tranqulity, his voice is soothing and his words often give much clarity to many of life scenarios. Had this audio book for a year now and still is, and probably will be for a long time, one of my companions.

I read this book a few years ago and thought I'd make a return to it recently. I think this is an excellent read and I've taken much from it. This book will sit well with the handful of books that I keep as my life guide. Enjoy!

I wish I could give this book to everyone in the world. We need it.