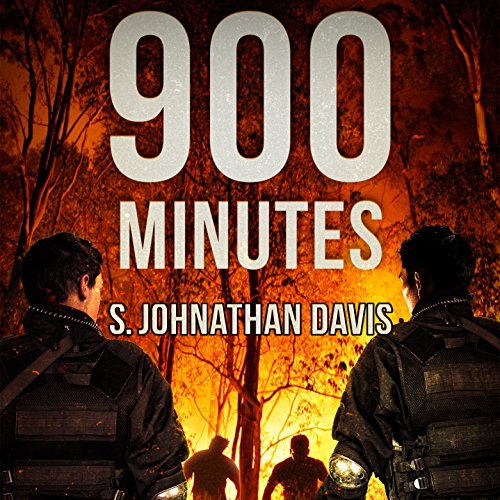 John is a father, but that wasn't his day job before the Zombie Apocalypse. Seven months after the events in 900 Miles, we pick up with John and Kyle who are bunkered down with their newfound community back at Avalon. Unexpectedly thrust outside the protection of Avalon's walls, they're forced back into the world of the dead on a scavenging run that should be routine. However, they quickly learn that there are forces at play making this journey anything but... In a race against time to get home, they quickly find themselves being hunted by a madman intent on stripping away the tiny slice of life they've fought so hard to hold together - ultimately forcing John to learn just how far he's willing to adapt to the rules of this new world. A world where most men are willing to do whatever it takes to survive. A world where Man is the real plague. How far would any father go to save his son? Get ready to jump back into the Hummer with John and Kyle in this fast-paced thriller that mixes zombie horror with medieval-style castle warfare!

What listeners say about 900 Minutes

Sadly, just as flawed as the first book.

What disappointed you about 900 Minutes?

The author is my issue. He is clearly lazy and does no research on things. And he is just not smart enough to create scenes that you believe in with the characters in question. Also, after two books ask yourself what you know about the characters and you'll come up with very little. There are no REAL conversations that normal people would have and so the characters remain two dimensional. I can't think of anything I know about Kyle other than he was in the military doing two very unconnected things and some how ends up as a rent-a-cop for a building.

The book has lots of stupid narrative. Examples of which would be, "the chances of surviving this new world are 50-50." Or lines like, "Kyle led us up the stairs like a guiding light." Can you picture yourself as a man ever thinking about another man leading you somewhere like that? I couldn't.

Example of where author is lazy on research. He has no idea how to fly a helicopter and REPEATELY has characters yanking back on the yoke to take off. I don't know how to fly a helicopter either, but I knew this was wrong in more than one regard - and so I took TWO minutes learning about helicopter controls. Clearly the author is too lazy to put in even this level of work into things he doesn't know how to do, and this is TERRIBLE as a writer to just make stuff up and hope no-one will notice your lack of understanding.

I could go on for an age about tactical situations in the book that anyone with military training will point out is unlikely to happen when you have military personal involved, but to say there are many is all I'll say.

They get found at night after crashing their helicopter into a deep lake. And, John, swims up from the bottom of that lake fully dressed, with a full backpack, full body armour and a hammer in his hand.

In a forest fire they manage to run from it. Forest fires move faster than a running man, so this would be hard, though not 100% impossible. However, in the same fire, John's body armour gets melted by the heat and yet none of them have any injuries. Even if the body armour was a high density poly plastic it would have melting temp of maybe 130 degrees Celsius, and we look at 2nd and 3rd degree burns at around 44 degrees Celsius.

The examples of odd things just go on and on, but even with these things it was the lack of character progression I hated the most. They are just bland because we never learn anything about them. They don't feel real. And the ending of the book was pretty abrupt in my opinion.

He was just over the top with some of the drama. In particular with John when he is thinking about his wife, or his kid and how he will do anything for him.

What would have made 900 Minutes better?

I wanted to hurt someone after hearing him ramble about his kid and wife for the 1000000000th time.

Ok! they are dead! stop with all the over the top drama. I really wished i just stuck to 900 miles

What was most disappointing about S. Johnathan Davis’s story?

Over the top 'Drama' about his son and wife

Every time he started to ramble about them again, i just fast forwarded.....there was a lot of fast forwarding taking place.

Also this story was very 'Flat' compared to '900 Miles'

Loved him in 900 Miles, but camping it up with being over dramatic when going on and on about the son.

If you could play editor, what scene or scenes would you have cut from 900 Minutes?

I could have lived with the way the first book ended, this totally ruined the illusion for me.
The first book was two guys against the zombies, the second book was a rambling sorry state of a chap who kept simpering about his kid.

Remove the book, send it to a dark place and never speak of it again

The story was action-packed and suspenseful with a few very profound thoughts sprinkled in. the narrator did anexcellent job at bringing the characters to life

This book started off oddly like the game Undead Rising 2 - a former warrior is now a full time devoted parent to his sick child. Following a minor disaster, the medication his child needs is no longer available and now John is on a mission to resupply to make sure that his child can grow up big and strong in a world overrun by zombies.

The difference between John and I? When faced with this decision on an Xbox game, I just stopped playing because I couldn't be bothered working to the time limit to save my ailing child. John is a better person than I am. A much, much better person.

John and his comrade in arms from the first book, Kyle, along with some other menfolk from the surviving human community of Avalon go out to fetch new medical supplies but are faced with more zombies than they counted on and the leader of Avalon they usurped in book one of this series, and is understandably less than happy with them.

John himself is a bit of a non-entity as characters go, his main humanising force is his unwavering devotion to his son and his determination to do whatever necessary to make sure he gets his medication back to him. He does have a couple of fairly contrived moral crises over some extreme acts of violence he's forced to commit to make sure he makes it home in one piece, though necessary to ensure he didn't come across as a complete psychopath they didn't really convince me of anything beyond that.

The story of this book was deliciously predictable, which left more room for the enjoyment of the journey which was bloody, violent and full of betrayal and a surprising number of helicopters for a post-apocalyptic world. I wouldn't recommend this book if you're looking for something original and thought provoking, but I definitely would if you're looking for an exciting action story.

This book is the second in a series and I would highly recommend listening to/reading the first book first as this follows directly on from that, I think I could have benefitted from knowing some of the backstory to this before starting as it took me a little while to get in to it.


Jamison Jones, the narrator of the audio was a perfect fit for this book. This story is told in the first person by the main character, John and Jamison embodies him perfectly, with a perfect 'regular guy' voice with the usual crack of emotion - he adds some more feeling to the character which I think may be lacking in the page version. I would definitely listen to more of his work in the future.

The production quality of this title was excellent, definitely no complaints from me on that score.

Ok, the reader still hasn't learned to say across without the t yet, additionally he has managed to channel Jack Nicholson when speaking as "the bad" guy....if you can handle that then I highly recommend this audiobook.

I lovsd the first book. I couldn't wait to start in on book 2. I just never got into it. When I realizes it was close to over I was shocked. Nothing really happened ....I mean stuff happened but nothing happened. Wish I'd have saved my credit.

I should have learned my lesson

too much yelling again everybody sounds like Jack Nicholson way too much I'm a great mama daddy. you need to buy a map major research about how things work like helicopters and that they don't have glass in them they have plexiglass , how would a helicopter sink to the bottom of the lake when it's full of air it wouldn't! anyway save your money don't buy this book I couldn't even finish it