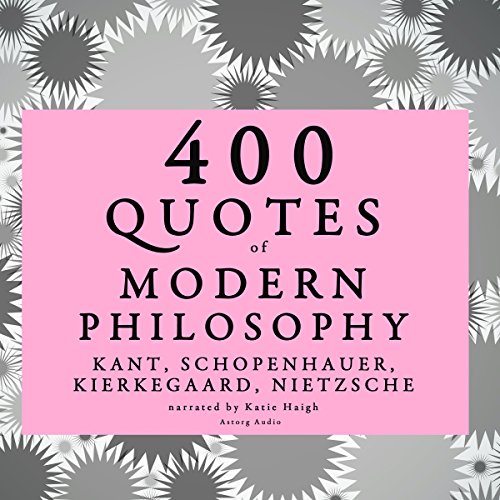 The great figures of modern philosophy led generations to struggle with the most crucial of questions and break through a new understanding of conscience and existence.

Nietzsche's work is radical, sometimes violent, often ironic; it fascinates anyone bold enough to delve into it, exerted a profound influence on modern intellectual history, and covers a wide range of subjects.

Immanuel Kant is one of the most important figures of German philosophy, said to have affected a Copernican revolution in philosophy, akin to Copernicus' reversal of the age-old belief that the sun revolved around the earth, through his ground-breaking work on the structure of experience. He argued that human experience could not not be affected by the features of our minds; the consequence is that we can only experience a phenomenal world, as conveyed by our senses, and never the reality itself, which nobody has ever seen.

Schopenhauer shows what happens when great philosophy becomes somber, pessimistic, even brutal, while still resonating with a sarcastic laugh. He was among the first to contend that the universe is essentially not a rational place; in his most famous work, "The World as Will and Representation", he argues that the individuals of a species do not have as much free will as is ordinarily thought.

Søren Kierkegaard focused primarily on what it means to become a subject of one's existence, what feelings arise when faced with life choices, and the relation with God through faith. He is credited with numerous reflections on the three stages of life; he also questioned existential despair, absurdity and anxiety.

What listeners say about 400 Quotes of Modern Philosophy

Gaining insight into the mind of these philosophical giants generally would require dedicating a serious amount of time scouring through numerous volumes of their works. Fortunately, the publishers of this wonderful quote compendium have reduced that timeline for us by compiling some of the best quotes and statements by these legendary figures.

The narrating cast was excellent. Listening to this title while I prepared Thanksgiving dinner was a real treat!!