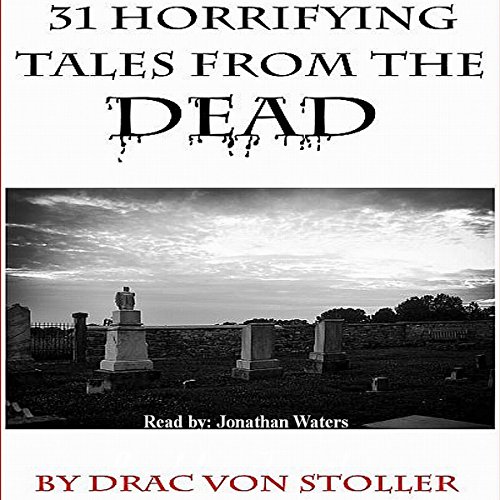 31 Horrifying Tales from the Dead

31 Horrifying Tales from the Dead

Sit back, turn the lights down low, and get ready for the scare of your life.

If your one of those listeners like I am and don't have the time to get lost in a long novel, then these short stories are what your looking for. Some of the characters you will hear about are vampires, witches, an impaler, a witch-finder general, aliens, a dead sea captain, an axe murderer, a shadowman, pirates, flesh eaters, ghosts, demons, the devil, evil fairies, and an army of the dead and the unknown.

Um is this for children?

Bad, bad, bad. That's all there is to say about this book, it's just really bad. Bad writing and bad narative. It's corny and full of tired old phrases while lacking detail. The framework is there but that's about all. To whom would I recommend this book? Well to students of creative writing as a prime example of how not to write. Of course if it was meant for children as I suspect it might have been then still it would bore most of them by its lack of detail and repetition. I'll keep it though because it might provide me with wome inspiration if I'm lucky. I think that explains why I gave it such a rating.

Would you ever listen to anything by Drac Von Stoller again?

Would you be willing to try another one of Jonathan Waters’s performances?

If you could play editor, what scene or scenes would you have cut from 31 Horrifying Tales from the Dead?

Nice idea, but it seems it was written by a 10 year old.

This was truly horrifying.

What disappointed you about 31 Horrifying Tales from the Dead?

These short stories were poorly written with no suspense or horror. Note to the author just saying the work 'bloody' does not make a story a horror story. The stories were just plain bad.

Would you listen to another book narrated by Jonathan Waters?

Jonathan Waters I had no problems with. His narration was a victim of 'garbage in garbage out'.

If you could play editor, what scene or scenes would you have cut from 31 Horrifying Tales from the Dead?

This cannot be saved, it should never have been published.