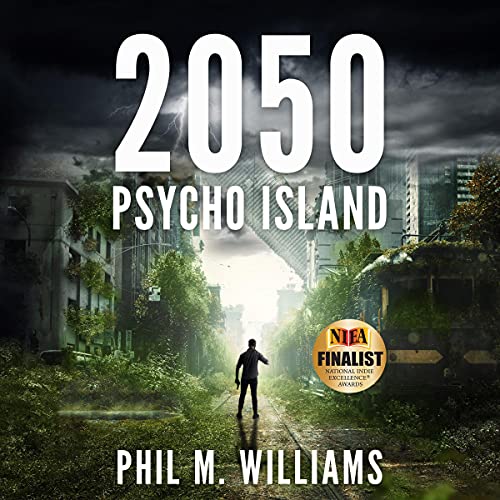 A tropical paradise destroyed by hurricanes.

Converted into an open-air prison.

The perfect place for undesirables.

The American dream is a mirage. The gap between the haves and the have-nots is wider than ever before. The haves live a life of opulence, with robotic domestics and self-driving vehicles. The have-nots struggle to survive, their jobs long since replaced by automation, with only Universal Basic Income standing between them and starvation.

Crime is nearly nonexistent, thanks to the surveillance state and the test. Ubiquitous cameras and facial recognition software deter and detect would-be criminals, and the test identifies psychopaths with 99.59 percent accuracy. Citizens who test positive receive a one-way ticket to US Penal Colony East. The have-nots call it Psycho Island.

In 2050, people struggle for their piece of a shrinking pie. Derek Reeves is one of those people, a small farmer, his business hanging by a thread. His wife, Rebecca, dreams of the finer things in life. Jacob Roth, CEO and member of the most powerful banking family in the world, sweeps Rebecca off her feet and gives her the lifestyle she craves.

Summer Fitzgerald’s pregnant. Like all prospective parents, she wants a designer baby. These children vastly outperform natural-born children. Unfortunately, her nurse’s salary and her fiancé’s low-level tech job don’t pay enough to give their little bundle of joy the must-have advantage in the new economy.

Naomi Sutton is a congresswoman with her eye on the White House. Unwilling to take campaign donations with strings, she lacks the budget or the connections for a serious run at the presidency. In a town of sharks, she’s the only one who truly cares about the people. Will she compromise her ideals to sit on the throne of power? Will she make good on her promise to close Psycho Island?

In 2050, the seeds of discontent are growing. The elites will stop at nothing to maintain their dominance. But the people are awakening to the rigged game.

Another Phil M Williams Book That Makes You Think.

This book has so many elements from political maneuvering to tense life and death struggles. The author takes so much from real life and basically asks, ‘What if?’ Whether or not he intends to scare you with this story he does. The most frightening part is it might just be possible. This could happen if we’re not vigilant. I’ve enjoyed many of Phil M. Williams books and know he looks at the world and tries to highlight those parts that aren't working for all. This book takes it further and shows a possible future that’s terrifying. Don’t think that this is a dark depressing tale of corruption and evil, although there's that there too, but it’s more about ordinary people getting caught up in other people's agendas and what they’ll do to fight back. It’s part one of the series so be warned you’ll want more when this part ends. I for one certainly want to know what happens next.
As with this author's other books the audiobook is read by Tristan and Sarah Grace Wright. They do another first rate job of bringing these characters to life. I like that they split the male and female characters between them as it gives more life to the story. Should we be worried they can so convincingly play the more unpleasant ones so well? For me they are now the ‘voice’ of Phil M. Williams books and you know they do a top job each time.

Entertainment at its best!

I listened to this books while doing my household chores and my house is now clean as a whistle! I couldn’t stop listening. This book has it all. The good the bad and the ugly and a snarky socialist politician! Looking forward to book 2