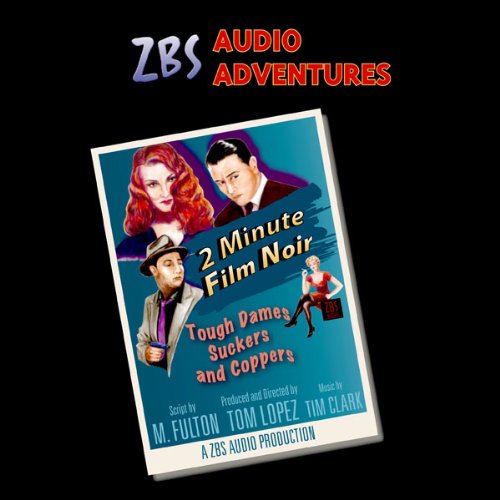 2-Minute Film Noir is a series of two-minute stories based on film noir characters. They are stories about gangsters, bimbos, cons, cops, hookers, lovers, losers, platinum blonds, mink coats, high heels, and neon signs reflected on rain-slicked streets. The writer, Meatball Fulton, wrote 50 stories in total. Can you imagine? It almost croaked him. But he sez it's some of his best work. And that's also true of the composer, Tim Clark - he's done some great noir music for this.

Okay, what is film noir? It's a style of cinema story-telling that took a different slant on the American Dream. Since they were low-budget, "B Movies", the writers and directors often had a fair amount of artistic freedom and created some memorable plots and characters. So, what is 2-Minute Film Noir? Well, look Kiddo, the easiest way to explain it is to hear it. Give a listen. We'll be you ain't never heard anything like this.

"Fifty mini-crime stories each run from a minute-and-a-half to three minutes. These hard-boiled vignettes feature stories about thugs, dames, mobsters, and hat-check girls. They showcase narrator Tom Lopez's talent with jokes, puns, absurd situations, and philosophical insights. The full cast includes ZBS regulars such as Bill Raymond, who adds a wry tone to his private-eye style. These slightly interrelated stories are reminiscent of Damon Runyon - with an existential and hallucinogenic bent. Tightly timed dialogue and jazzy atmospheric music by Tim Clark set the mood in this entertaining collection." ( AudioFile)

All the right players are there, from the tough-talking gangsters to the honey-voiced, mysterious women, but the stories fail to sing. The dialogue is flat and uninspired, and the resolutions are often contrived and unsatisfying.