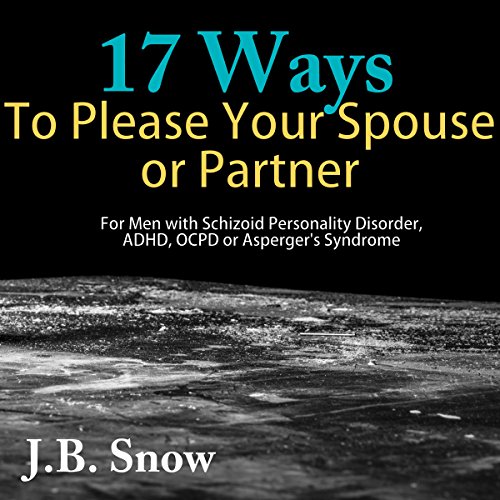 17 Ways to Please Your Spouse or Partner

17 Ways to Please Your Spouse or Partner

Schizoid personality disorder, ADHD, and Asperger's syndrome cause a lot of different deficits in the communication and socialization of a person with the disorders in comparison to a neurotypical (non-autism spectrum) brain. These disorders also can cause a lot of memory retention problems, cognitive delays, planning issues, rigidity, and aggression. People who grow up with any of these disorders often may feel alienated for most of their lives.

People with schizoid personality disorder, ADHD, or Asperger's syndrome may set their lives up the way that they like them. They like things to be just so. They might like their stuff to be in the same place all of the time for ease of finding it later. They might need rooms to be very clean or to be organized in a symmetrical way. They might need the food in the pantry, cupboards, and refrigerator lined up alphabetically or in color-coded rows. They might need the lawn to be mowed in certain patterns.

People with these disorders also may have sensory processing disorder. They may be sensitive to lights, sounds, noise, touch, smells, and tastes. They might get especially overwhelmed when they are out in public areas. They might become agoraphobic or quite isolated due to their tendency to become overloaded in the environment. Or they develop a strong dislike of other people.

If you struggle to make your partner happy this book seems to know why and what you can do about it.