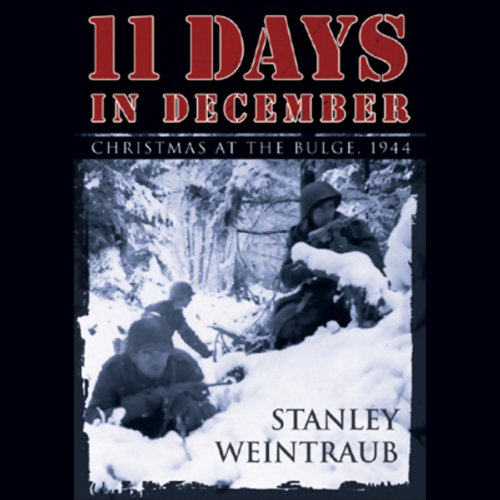 Christmas at the Bulge, 1944
By: Stanley Weintraub
Narrated by: Patrick Cullen
Length: 5 hrs and 28 mins
Categories: History, American
4 out of 5 stars 4.2 (6 ratings)

11 Days in December tells the story of one of the grimmest points in World War II and its Christmas Eve turn toward victory.

In December 1944, the Allied forces thought their campaign for securing Europe was in its final stages. But Germany had one last great surprise attack still planned, leading to some of the most intense fighting in World War II: the Battle of the Bulge. After 10 days of horrific weather conditions and warfare, General Patton famously asked God, "Sir, whose side are you on?" For the next four days, as the skies cleared, the Allies could fly again, the Nazis were contained, and the outcome of the war was ensured.

Renowned historian and author Stanley Weintraub weaves together the stories of ordinary soldiers and their generals to recreate this dramatic, crucial narrative of a miraculous shift of luck in the midst of the most significant war of the modern era.

"A compact, fast-moving account of those critical days....Weintraub's use of the letters and diaries of 'lesser' soldiers enlivens his account and makes this a particularly poignant saga of men in war." ( Booklist)

I read a lot of military history books and I have to say that this one was not one of the best.

It was really disjointed, moving from the macro (what was happening between the armies) to excruciating micro (long, detailed descriptions of a meal a certain general ate).

Can't say I'd recommend this book.

Best story of it kind

Would you consider the audio edition of 11 Days in December to be better than the print version?

What does Patrick Cullen bring to the story that you wouldn’t experience if you just read the book?

A very well researched and described story of what happened at the Battle of the Bulge.

But there are better WWII books.