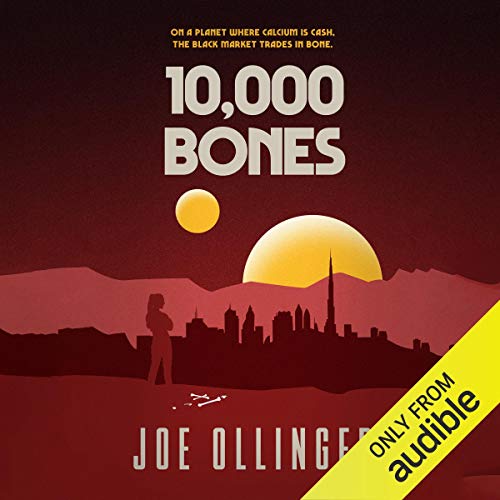 By: Joe Ollinger
Narrated by: Khristine Hvam
Try for £0.00

When a planet’s currency is made of calcium, a Collections Agent not only follows the money...but also the murder.

On the planet Brink, calcium is cash. The element's scarcity led the world's government to declare it the official currency. In the decades since, the governments of other colonized worlds have suppressed shipments of calcium in order to maintain favorable exchange rates, while Brink's Commerce Board has struggled to negotiate importation quotas to keep the population alive and growing.

Taryn Dare is a Collections Agent, a specialized detective tasked with finding black-market calcium and recovering it, so that the Commerce Board can recycle it and distribute it as currency. Taryn is fueled by one goal: to save up enough currency units for a one-way ticket to a better world. But when a job recovering a human corpse uncovers a deadly conspiracy in the system, Taryn is drawn into an investigation that may threaten her life, and the very fabric of her society.

What listeners say about 10,000 Bones

a quick-paced adventure lacking originality, a mish-mash of things read, heard, or watched before.
better not to think too hard about or you risk falling into the plot holes.
a heroine who can out-shoot 20+ merc's armed with auto weapons with just a little pistol.
whose guesses turn out to be right,
who can survive a shoot out with hardly a scratch and even if wounded can keep going.
the narration good fast moving and fun but the story/plot was poor.

A Sci fi thriller that keeps you on your toes

Not sure why this book is under the radar but this is a great read. Really sets up the admittedly morbid world that seems alive through the prose. I cannot recommend enough.

The narration was perfectly tuned to the story: hard-boiled but warm, brisk but clear, lean but evocative.

The story, easily suited to be adapted into a Hollywood screenplay, is full of action; in this sense the measured narration can sometimes feel slower paced or lower energy; luckily I usually listen to my audio books at a higher speed on the app.

Great read with rich characters and deep intrigue. The story had plenty of twists and turns to keep me hooked.

This book feels like a sci-fi/action/thriller movie that you’d see and love but everyone would say, “...yeah, but have you read the book!”
Such a pager tuner. I was totally engaged, listened to it in just a few sittings.

Loved the detective meets sci-fi nature of it, all wrapped in an intelligent premise and plot. Also allegorical and timely in it’s exploration of the concept of currency.

Hoping for a sequel or other book from this author.

Taryn,the protagonist, was a well-relatable character who won me over from the first chapter. The Brady character kept me guessing who’s side he was backing. Great action scenes. I hope Mr. Ollinger writes many more books like this. I know I will read them.