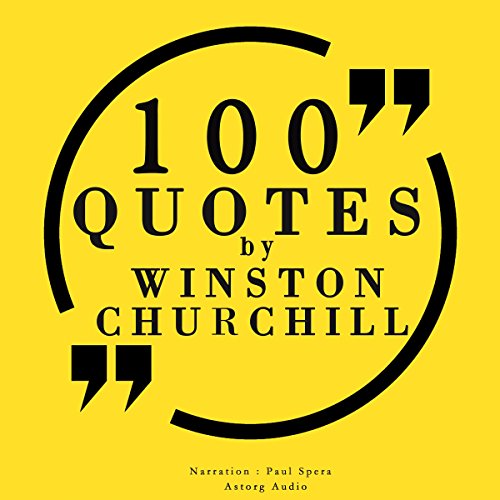 By: Winston Churchill
Narrated by: Paul Spera
Try for £0.00

Sir Winston Churchill was a British statesman, orator, and author who, as prime minister, rallied the British people during World War II and led Britain to an allied victory. Churchill's "bulldog" spirit seemed to summarise the mood of the British people even during the bad times, such as Dunkirk, and the inspirational victories, such as the Battle of Britain. His was a brilliant mind, full of wit and intelligence; his oratory brilliance and his admirable style led him to win the Nobel Prize in Literature in 1953.

Churchill is quoted in the English language perhaps more than anybody, with the exception of Shakespeare; and as he considered them a shortcut to unending pools of knowledge, he was a great fan of quotation collections too. In that spirit, these 100 quotes have been carefully selected from his body of work to introduce you to his mighty spirit and let you draw freely from his literary finds and wits.

What listeners say about 100 Quotes by Winston Churchill

Some quotes are utterly priceless. I especially like the quotes against socialism and against appeasement. the appeaser is one who keeps feeding the crocodile hoping that he will eat him last. so true. so priceless.

The truth is incontrovertible !!
that my favourite quote of all the
quotes in this audio book.

Great quotes but some were repeated.

Some repeated quotes were adjusted or clipped, but it's gotta be hard to compile 100 quotes from anyone. Solid

It's a great teaching tool about life for myself. It's a wonderful book. It mentors and guides.

It is amazing to me as I listen to the quotes from Churchill the fact that they apply to this day an age, it seems they are timeless, at least the ones that apply to me.