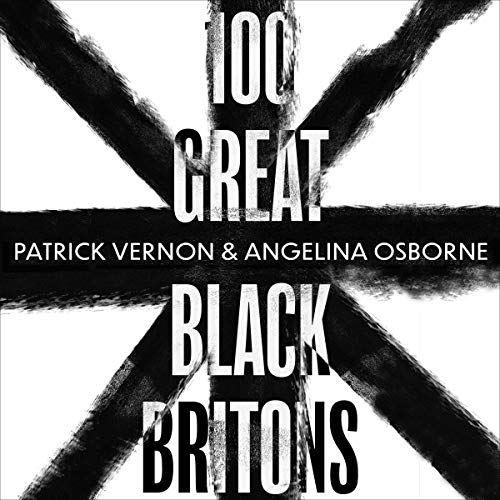 By: Patrick Vernon,Angelina Osborne
Narrated by: Ben Onwukwe
Try for £0.00

A long-overdue book honouring the remarkable achievements of key black British individuals over many centuries, in collaboration with the 100 Great Black Britons campaign founded and run by Patrick Vernon OBE.

'Buillding on decades of scholarship, this book by Patrick Vernon and Dr Angelina Osborne brings the biographies of Black Britons together and vividly expands the historical backdrop against which these hundred men and women lived their lives. Despite prejudice and racism, they went on to achieve outstanding success in fields from politics to film-making; publishing to teaching; sport to medicine; law to business; and music to architecture...life stories have their role to play, as they did at the beginning of this process, in revealing and making sense of the past and guiding us into a better future'

From the Foreword, by David Olusoga

Patrick Vernon's landmark 100 Great Black Britons campaign of 2003 was one of the most successful movements to focus on the role of people of African and Caribbean descent in British history. Frustrated by the widespread and continuing exclusion of the black British community from the mainstream popular conception of 'Britishness', despite black people having lived in Britain for over a thousand years, Vernon set up a public poll in which anyone could vote for the black Briton they most admired.

The response to this campaign was incredible. As a result, a number of black historical figures were included on the national school curriculum and had statues and memorials erected and blue plaques put up in their honour. Mary Seacole was adopted by the Royal College of Nursing and was given the same status as Florence Nightingale. Children and young people were finally being encouraged to feel pride in their history and a sense of belonging in Britain.

Now, with this book, Vernon and Osborne have relaunched the campaign with an updated list of names and accompanying portraits - including new role models and previously little-known historical figures. Each entry explores in depth the individual's contribution to British history - a contribution that too often has been either overlooked or dismissed.

In the wake of the 2018 Windrush scandal, and against the backdrop of Brexit, the rise of right-wing populism and the continuing inequality faced by black communities across the UK, the need for this campaign is greater than ever.

Good collection but not as good as good be

The book itself is a good collection, though it is written from an apparent perspective. It is noteworthy how some Black Conservative figures are absent such as Paul Boateng, who is the first Black cabinet Minister in the UK, and James Cleverly, teh first Black Conservative party chairman are noticeably missing. Strange is also teh absence of Lord Learie Constantine, who on the one hand was an assistant of West Indian Recruitment and later an important challenger of racism with his case against Imperial Hotels. John Sentamu, the first black Archbishop of the Church of England, religiously conservative in outlook, is also missing. Some comments on Labour, such as leaving Ken Livingstone without a critique and leaving Gus John's comment on Labour and antisemitism self-evident, are giving an impression of bias, which such a book should not have, especially if it is distributed in all school classes in the UK. Ben Onwukwe's reading in tongues is sometimes highly inappropriate and irritating. He does so on figures such as Equiano, where we do not know how he sounded, but also on Stuart Hall, who spoke quite high English in public. Reading should have been kept neutral. Still worth listening to, as there is more to be learned here, than the few named commissions. The audiobook is a good occasional audiobook, which can be listened to, for example on travels, as the profiles are never more than about eight minutes. This book should be updated in a few years, rectifying teh omissions and then read without tongues.

Amazing and much needed.

The book inspires through introducing readers to a broad range of Great Britons.

It’s well written and can serves well as a reference book to educate on the positive contributions from people in and before our lifetime.

The book is an alphabetical list of 100 British people (living and dead) that have achieved a level of notoriety through their actions and or words. The book provides a snapshot of some of their achievements along with subjective, positive, but bias remarks that often focus on shocking racist experiences they have faced and their efforts to affect positive change. This it is believed, was done in an attempt to personalise and give insight to the outward persona of the persons discussed.

There is however one reoccurring theme, which is how racism has shaped or motivated their actions. That in itself raises questions.

It would have been nice to have had more than 41 images within the book and the possible use of a title that did not describe the 100 people in terms of a colour. After all, people of African descent transcend colonial divisive descriptors.

The forward, preface / introduction to 100 Great Black Britons is a highly informative and well researched look at the past and present state surrounding the mainly Anglo-Saxon European current polarized and sanitized accounts of England’s past that has for too long displaced the reality of British history. This study includes a wider world and the notable contribution of those of African descent.