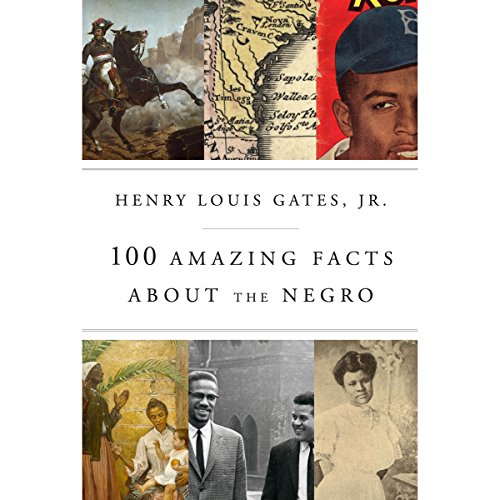 100 Amazing Facts About the Negro

The first edition of Joel Augustus Rogers' now legendary 100 Amazing Facts About the Negro with Complete Proof, published in 1957, was billed as "A Negro 'Believe It or Not'". Rogers' little book was priceless because he was delivering enlightenment and pride, steeped in historical research, to a people too long starved on the lie that they were worth nothing. For African Americans of the Jim Crow era, Rogers' was their first black history teacher. But Rogers was not always shy about embellishing the "facts" and minimizing ambiguity; neither was he above shock journalism now and then.

With élan and erudition - and with winning enthusiasm - Henry Louis Gates Jr. gives us a corrective yet loving homage to Rogers' work. Relying on the latest scholarship, Gates leads us on a romp through African, diasporic, and African American history in question-and-answer format. Among the 100 questions: Who were Africa's first ambassadors to Europe? Who was the first black president in North America? Did Lincoln really free the slaves? Who was history's wealthiest person? What percentage of white Americans have recent African ancestry? Why did free black people living in the South before the end of the Civil War stay there? Who was the first black head of state in modern Western history? Where was the first Underground Railroad? Who was the first black American woman to be a self-made millionaire? Which black man made many of our favorite household products better?

Here is a surprising, inspiring, sometimes boldly mischievous - all the while highly instructive and entertaining - compendium of historical curiosities intended to illuminate the sheer complexity and diversity of being "Negro" in the world.

"A collection of vignettes about the black experience in the United States and around the globe. In 1957, respected Pittsburgh Courier journalist Joel A. Rogers published a book, 100 Amazing Facts About the Negro with Complete Proof, based on research he had conducted for his columns...Gates, the prolific scholar and popularizer of black history, presents this book as an homage and update to the work of 'Mr. Rogers'.... The pieces range widely in chronology, theme, and geography, and his facts about the 'Negro' (the anachronism is intentional, part of the tribute to Rogers) most heavily emphasize the African-American experience but also explore Africa and the diaspora across the Americas and in Europe...Gates surprises...intrigues, and rarely disappoints." (Kirkus Reviews)

"Gates pens a corrective yet loving homage to a work of the same title published in 1957 by Joel A. Rogers, a largely self-educated black journalist and historian." (Publishers Weekly)

"Narrator Dominic Hoffman's deep and raspy voice serves as the perfect voice to capture Gates's writing...he vocally communicates the gravitas of these figures and moments." (AudioFile)

What listeners say about 100 Amazing Facts About the Negro

great book, go read now lol. u will not be disappointed, takes u on a ride thru black greatness.

A must read and listen to Book for Black Families

A “Must Read Book “ for Black families and a necessary book for all school libraries.

I was so impressed by the author's dedication to sticking to the facts. He reinforced my belief that only people of color will take the time and effort to rediscover the facts of their history that has been hidden and distorted by primarily white so called historians.

A ton of information

There is a lot of good information in this audiobook. I thought I knew my people's history until this.

I learned so much from this book. There were so many details about African-American life and the life of Black people in the Diaspora. I did not know that the Black population in Argentina had been quite large, and that genocide was practiced on that population. Nor had I known that Buenos Aires used to be a large slave market. This book presents little details like that which lay the groundwork for future research.

this was very infirmational, i did not think some of the facts were necessary. but very informational

Concentrated historical facts. It really makes an effort to present nuances of the stories around the facts

This was a truly enlightening listen. Its sends a ton of topic to look into more and is undoubtedly truthful in many aspects.

Great compilation of facts involving black folk. Already on my second listen just in case . . . However, narration was going well until the section honoring the educators promoting Black History was stained when the oft usage of " libary " contradicted the whole section. Still, I thought it a great listen.