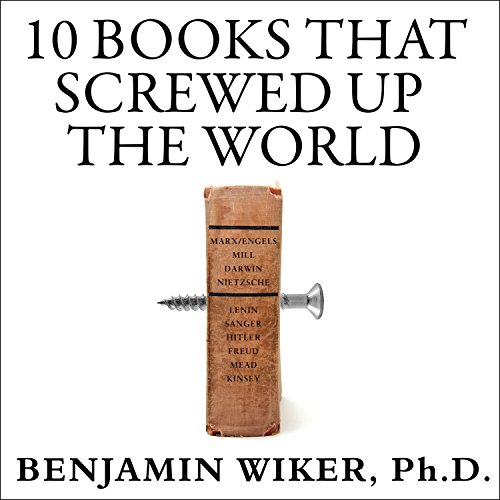 10 Books That Screwed Up the World

You've heard of the "Great Books"? These are their evil opposites.

From Machiavelli's The Prince to Karl Marx's Communist Manifesto to Alfred Kinsey's Sexual Behavior in the Human Male, these "influential" books have led to war, genocide, totalitarian oppression, family breakdown, and disastrous social experiments. And yet these authors' bad ideas are still popular and pervasive; in fact, they might influence your own thinking without your realizing it.

Here with the antidote is Professor Benjamin Wiker. In this scintillating new book, he seizes each of these evil books by its malignant heart and exposes it to the light of day. You'll learn:

What listeners say about 10 Books That Screwed Up the World

I really enjoyed the listen to this book.

I found it quite helpful in overhauling what the book was preaching / teaching.

I think that because I am not American, I could not work out if the author was snarky or being silly / sarcastic.

A head on confrontation with several poisonous ideas presented in a level, reasoned and unpretentious manner. Ideas have consequences and this book shows the reader how some of the worst ideas have had a lasting and profound impact on our society. The narrator does the work justice and it was a truly enjoyable presentation. One of the best I've heard in a long time. Well done.

The roots of our culture's decline

Listen more than once to absorb, shudder at & assess how the civilized world degraded to the self-worshipping, indulgent, morally bereft state. Narrator's voice so deep, had to turn up volume to catch every word.

Dr. Wiker covers some very dreadful material in this audiobook. Thankfully because of his courageous coverage of the books found herein, I have received a greater understanding of the authors. I won't hesitate to say; I do not have either his courage or temerity! Let me however quickly add that this is truly an excellent and much needed book.

Robertson Dean did a terrific, and I would say a gripping job at reading the text!

If only everyone could read this book!

This book opened my eyes to the miseducation I had received and so many are still receiving!
How culture can be shaped by lies, when only part of a story is told! Yet it has happened many times over as this book documents

How often a charismatic person with a so-called new philosophy was just trying to justify and normalize their selfishness.

Some merit, but more religious masquerade

I will openly admit that I wanted to kick myself for not reading the reviews prior to purchasing this audiobook. All the reviews would have kept me from stepping directly into the trap of this book, which in part, must have been deliberately set. The titles and book synopsis do not disclose the blatant reduction of nearly each criticism to a Christian fundamentalist viewpoint, which should be OPENLY DISCLOSED. The book was well written, flowed well and was interesting with each chapter until the abrupt drop into a religious sermon. What was disappointing was that the author, who is obviously intelligent and a good writer, describes some valid criticisms and makes some arguments that keep you just interested enough that you think, "well, maybe the next chapter will be better." I can only hope to save another person some time, as others in the review section tried to do for me. The single biggest statement that can be said about the reviews of this book is that you can be rest assured that anyone who gave it 5 stars and "bought extra copies for _____" is an individual with strong Christian fundamental beliefs...which should divulge this book's blatant bias. I have submitted a request to Audible that this book be moved to the religious section, as keeping it in nonfiction is misleading. I'm sure that if you purchase this book KNOWING it is a theologic book, you will enjoy it immensely and you will be glad you spent the money. 4.5 stars for the writing & text, but ZERO for the fact that it is a religious book masquerading as non-fiction literature.

An Exercise in Philosophical Hypocricy

Let's get the easy part of this out of the way first. The pacing and presentation of the material is outstanding, along with the narration, which perfectly fits with the tones of intellectual superiority with which the author writes.

The author actually starts quite strong, with some reasonably well presented chapters on Machiavelli through Hobbes. I agree VERY strongly with the author's early assertion that it is ESSENTIAL to read these books in their entirety to understand their implications (yes, even Mein Kampf.)

Now for the flies in the pudding. Beginning with his discussion of Rosseau, however, the author begins to reveal his biases and hidden agenda. He derides Rosseau's work as the beginning of all the misguided liberal agenda ever since.

For the balance of the book, the author is unashamed of saying that it is impossible to establish a legitimate standard of right and wrong based upon anything but the Judeo-Christian model. Essentially all of his discourse beyond that point consists of cherry-picked facts and ad-hominem arguments (particularly with respect to Meade and Kinsey.

In summary, if you want to read something to spare you the effort of reading those other difficult works and to reaffirm a world view intolerant of anything but extreme religious conservatism, this is the book for you. Otherwise, go read the original philosophical works yourself, and spare yourself the hypocrisy.

The concept of this book was enticing. It sounded like an intellectual disection of some of the most toxic ideas ever introduced into human culture. I didn't get far before realizing it is a tract on the falsity of all moral systems that do not derive directly from religious belief. A toxic idea if ever there was one.

I feel like I've been hoodwinked into buying this book! It is not a proper critique on the books in question at all. It is just a Fundamentalist Christian diatribe on why we should ignore anything that an atheist tells us.

Clearly the author has some interesting and compelling perspectives on philosophical world views developed over the centuries however he sees all this through one lens - Christian fundamentalism.
This was not apparent in the book description so feel somewhat duped.
He does not fairly argue that a world view without a belief in a Christian anthropomorphised deity and a literal acceptance of the bible is not only specious but 'evil'.
Without the religious self-justifying supercilious commentary it could have been an interesting listen.
And I'll scream if one more creationist tells me about the great designer in the sky being responsible for creation and their convoluted logic in explaining the biological horrors that kill millions each year.
This book should be under a 'Religious' heading.

Hard to get past the author's misguided premise

Two starts because the author is clearly up on the subject matter he is writing about.

Missing the other three because, well, I just can't get past the author's apparent assertion that one cannot be a moral person without religion. I find this somewhat amusing given some of the things done in the name of religion, but this isn't the place to go into that. Also, he's of the mind that a viewpoint cannot be valid unless it embraces some form of God as one of its major tenants.

I agree with one of the other reviewers here - brand this clearly as religious content so that one knows what they are spending their credits on.