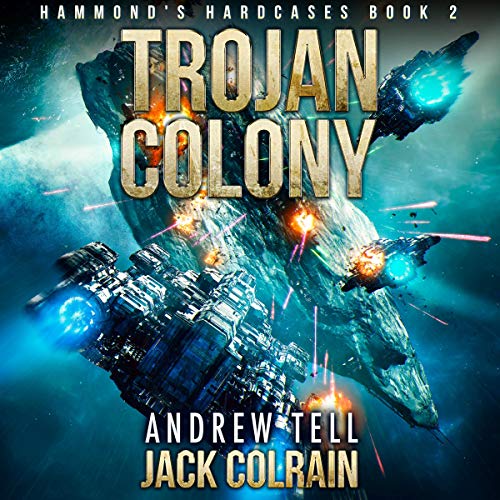 By: Jack Colrain
Narrated by: Andrew Tell
Try for £0.00

The ends justify the means - except when humanity’s survival is on the line.

Earth’s landscape lies scorched by weapons fire after the most recent round of alien attacks. The technology the Mozari left behind has advanced scientific understanding at breakneck speeds, giving humanity the chance to fight back against their Gresian foes. Spaceworthy vessels and all-new weaponry are pumped out of orbiting factories, boarded by the brightest minds to begin colonizing new planets.

But humanity is still vulnerable.

Lieutenant Daniel West understands this, which is why his recruits are the most highly trained the military puts out - regardless of the physical and mental demand it takes to make them that way. Any soldier in the newly created Special Warfare Task Force must plan and prepare for every possible scenario.

After all, the return of the Gresians isn’t just inevitable. It’s imminent.

Now assigned to the United Earth Ship Shenzhen, Daniel is chosen to command a platoon to protect a team of elite colonists traveling to LTT-8270. But it isn’t until their arrival that the true mission becomes evident, and Daniel discovers an even more horrifying truth.

A truth that demands too high a cost for humanity’s future.

This novel contains violence and profanity.

What listeners say about Trojan Colony

Trojan Colony, second in the series Hammond's Hardcases, continues the story of the Earth versus aliens through the exploits of Daniel West and the Special Warfare Task Force. A group of colonists are escorted to a new potential home, where earlier archaeological traces were discovered. Now newly equipped and trained with Mozari ship drives and exo-suits, thanks to the help of the A.I., the Hardcases have to face not just the Gresians but the betrayal of the military itself.

An interesting story line with a very high percentage of action, the book is well narrated by Andrew Tell, who reads with good intonation and understanding of the text. He also gives individual voicing for the different protagonists. But the delivery is a little slow and, at times, hesitant, but this is resolved by increasing the playback speed to 1.25.

A second story which can still be read as a stand alone, Trojan Colony appeals to the military science fiction reader who enjoys big scale action but also appreciates the ongoing life story of individual protagonists. My thanks to the rights holder who, at my request, freely gifted me with a complimentary copy.

Wow! What an action packed adventure

This is the second book in this so far brilliant trilogy, I really enjoyed book one and hoped that this would be as good and it actually turned out to be even better, much better actually but I can only rate it as five stars. The action flies along at a lightning pace and I just could not stop listening. I enjoyed getting acquainted with the strong characters and I really liked the AI character Lizzie.
As usual the narration by Andrew tell is just top notch.
I highly recommend this book to any Sci-Fi or action adventure fans.
I was given this book to give a an honest and objective review.

A slow start with a great finish

The strong finish off the last book overshadows the start of this one a little. However, the strong finish and twist really makes up for it. Again the aliens are kept relatively mysterious, along with the machinations of the Earth governments. I recieved a review copy of the book.

Trojan Colony starts out slow, but the second half has lots of action. The story was interesting with some good ideas, but the characters were flat. Hopefully everything will come together in the third installment. At least the narration was excellent.

Good story if you can get past the dialogue.

I like the story but I could not get past the weird up and down cadence of the narrator.

This book started of ok, but the contrived reasoning behind the decisions were poorly thought out. Most of the tension in this book could/would have been solved by preplanning so simple and obvious that it really leaves the reader confused and asking why. There were attempts to fix this later in the book but it was a poor attempt. this series had a lot of potential and I am really sad to see it go down this path.

Maybe I need a change. It seems the last few books I've listed to are - poor. Few redeeming qualities. In the case of Trojan Colony, even the ending was agonizing.

I won't give a long, drawn out explanation of why this didn't work for me. The only thing I could think of throughout the whole book was that the max age of the most senior character (some General or another) is 17 years old and all other characters are younger. The LT and the Professor would be about 13 years old I'd guess.

My biggest complaint is that this character maturity shift seems to have become the norm. And that's probably an admission that I've become jaded.

I hate writing negative reviews. I have much respect for the authors and the narrators that put together all these hours of entertainment. But, when you read this book, did you find that the conversations, internal thinking, situations, or responses were that of adults or kids?

And it ends with the typical ignorant threat of extortion and new mission. Not a single meaningful conversation.

Since the last story Daniel West is training people just as harshly as Hammond did him to prep for the inevitable return of the Gresians as they attempt to finish their job. The stuff left by the Mozaris is also resulting in humanity's ability to build and increase our knowledge at breakneck speed creating weapons and ships with which to defend ourselves as well as colonize.

Anyways, at some point Daneil and his team of "Hardcases" end up on a mission which should be simple but there is a lot more than meets the eye (as with all things in this story) and it becomes a tense exciting story where they attempt to survive in the middle of space they still don't fully understand.

I think it's a little less good than the prior story in the series but still an entertaining science fiction story with a number of exciting moments and still has me excited to continue the series.

I received the review code for this audiobook at my request and have voluntarily left this honest review.

If it weren't for the narrator consistently mispronouncing a certain character's name (In the second book!) I'd have rated this higher.