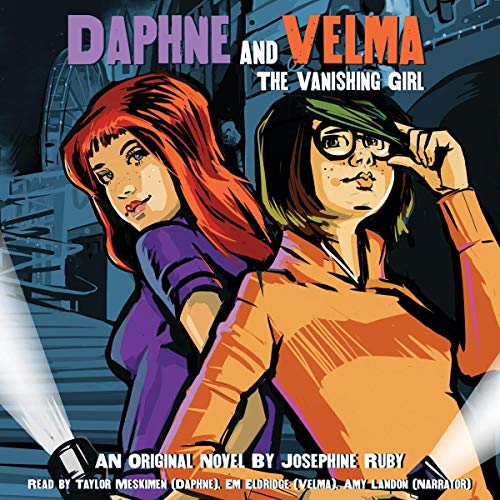 Popular Daphne Blake and über-nerd Velma Dinkley are not friends. They aren't enemies either, but they don't have any reason to speak to each other, and that's how they prefer it. The two girls grew up together - they'd been best friends since pre-K - but when they hit middle school, Daphne dropped Velma and never looked back.

These days, Daphne's deep in the popular crowd, daughter of the richest family in town, while Velma's an outsider, hiding from the world behind her thick glasses. When they run into each other in the halls of Crystal Cove High, they look the other way.

But then Daphne's best friend, Marcy - who happens to be Velma's cousin - goes missing. A century ago, there was a wave of disappearances in Crystal Cove, and many local people believe that supernatural forces were behind it. Now the whole town believes those same forces are back...and up to no good.

Daphne and Velma may be the only ones who can solve the mystery and save Marcy - if they can trust each other enough to try. Especially since the truth might be stranger - and scarier - than either girl can imagine....

What listeners say about The Vanishing Girl

The narrator was pretty good. The story was your typical Scooby Doo mystery, with a mix or high school drama. I rolled my eyes a few times but overall I'd listen to the second book. I listened to the whole book in one day at work so....

I would love to see more books like this.
I listened to it while walking on the treadmill.

Bored - could not finish

I love scooby doo and Velma is my favorite of the mystery gang. I thought I would love this. I am not sure why I didn't - perhaps a bit too much girl drama?

I love this book! I love Scooby - Doo and the gang. I wish this book came out when I was younger. When I was a kid my friends and I LOVED Scooby - Doo! We would have had so much fun reading this book. I really liked the attention to detail in this. I feel like this is a fun new look at the characters. I will give this another listen.

Great update to the classic!

I love this new take on the world of Scooby-doo. All the old tropes but with in-depth look at our two heroines. The characters act like real teenagers wrestling with their own emotions, sometimes making mistakes and errors. Lots of fun!