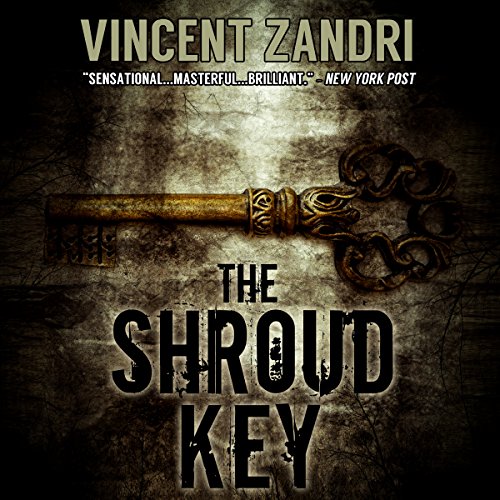 By: Vincent Zandri
Narrated by: Andrew B. Wehrlen
Try for £0.00

Chase Baker is a true Renaissance Man. He's also a man who knows how to find trouble. A part-time resident of Florence, Italy, his resume reads like a modern day Da Vinci or Casanova. Writer, private investigator, tour guide, historian, treasure hunter, adventurer, and even archaeological sandhog, Chase is also a prolific lover. Unfortunately for him, his dangerous liaisons all too often make him the target of a jealous husband.

Now, at the direct request of the Florence police, he finds himself on the trail of an archaeologist by the name of Dr. Andre Manion who's gone missing from his teaching post at the American University. But having worked for the archaeologist several years ago as a sandhog on a secret but failed dig just outside the Great Pyramids in the Giza Plateau, Chase smells a renewed opportunity to uncover what just might be the most prized archaeological treasure in the world: The mortal remains of Jesus. But how will Chase Baker go about solving the mystery of finding both the archaeologist and the Jesus Remains?

With the help of Manion's beautiful ex-wife, Chase will manage to secure an up-close and personal examination of the Shroud of Turin, not only to view the famous image of the crucified Christ, but to unlock the relic's greatest secret, which is none other than a map, or a key, detailing the precise location of Jesus's body.

What listeners say about The Shroud Key

“Money sings and I love music”

If you’re looking for an easy to listen to, Romantic, Action story, then this is for you.
A little cliched and unbelievable at times, but enjoyable nonetheless.
Well narrated with good voices.
This is my honest opinion of a free review copy.

A fun-filled thrill-ride of an adventure

This book seems to be a mix of Indiana Jones, Tomb Raider & Dan Brown's Robert Langdon series with it's tombs, mysteries and biblical searches. It's adventurous, thrilling and in places had me on the edge of my seat. Plenty of humour and sarcasm along with the excitement. If you can suspend belief for a while and want a fun, action packed read then this fits the bill.

The narrator was pleasant to listen too and did a great job with the character voices and had a good delivery. A shame he pronounced Quay as Kway instead of Kee which jarred a little.

I really enjoyed the book and look forward to the next in the series.

I received a free copy of this audiobook either from the author or a promotion or giveaway and am voluntarily writing an honest and unbiased review.

Tomb Raider Vs The Vatican

Chase Baker is given a job by Detective Chiprani to find and bring back Dr. Andre Manion who has gone missing in Egypt while in search of the bones of Jesus. Dr Manion’s ex-wife Anya was paying for the trip and insisted on going with Chase to find her husband. Between the Muslin Brotherhood and Vatican guards, the search for the professor and the remains of Jesus is fraught with danger, with their lives in danger at every turn. Lots of action but also too much of Jesus. I thought the last couple of chapters were a bit on the silly side and the story would have been better without them, and ending when he said goodbye to his friend.

I was really engrossing in the story right from

the beginning to the end great book long but Great I received this book from the publisher, author and or narrator for a honest review via audio book. com

Hooked me from the start

Interesting and captivating story, this one hooked me right away. I'm not one for anything religious but the story was intriguing enough to interest me. A fun enjoyable mystery/adventure. Reminded me a lot of Dan Brown's books.

The narrator gave a great performance.

Twists and turns keep you riveted!

What did you love best about The Shroud Key?

I had never heard of the concept of Jesus' bones left on Earth.

Just as you thought they got away from the bad guys they were caught again.

Have you listened to any of Andrew B. Wehrlen’s other performances before? How does this one compare?

No but his diction and cadence kept you spellbound.

When he was in the cemetery during the thunderstorm you felt the spiritual overshadowing of God.

Nice mystery, with many twists and turns. Highly recommend giving this a try. It just gets better and better.

I loved the intrigue, excitement of how he found what he was looking for - himself.

Chase Baker is another of Zandri's "flawed heroes" as he runs from creditors while trying to find the bones of Jesus Christ. He fights Mafia, the Catholic Church, greedy bad buys, and betrayal. The storyline has some "convenient" coincidences but runs smoothly and overall is fun and entertaining. Take the ride!

This book has it all. Adventure, action, sex, suspense, and the search for truth. Chase Baker is a wild, handy in a clutch kind of guy but one with a heart. A heart and sincerity he tries to hide behind sarcasm and jokes. It still shines through in the moments that matter. Twists and turns abound in this first installment of a new globetrotting series!

Detective .Cipriani.has a job for Chase, one in Egypt, find an American Dr. Manion an archeology. professor, he found relics belonging to Jesus family.He has been here teaching, and went missing, last month. The job will be dangerous,and not easy. Being raised a catholic, I knew about Jesus. the life of Jesus, if it were his bones, a private sell, would be vast. His wife, would be the one I’m working for, they are divorced, because of his obsession with Jesus, love for him gone, but still cares for him, wants him found. Muslin Brotherhood, a powerful Egyptian was this someone behind him missing. A fascinating story, that flows, you are with Chase, and wanting answers. .
Given ARC for my voluntary review and my honest opinion. Great Narration & Story

The Shroud Key is the first Chase Baker book. Not too many people get to see the Shroud of Turin up close. Living a life as an explorer, sandhog, treasure hunter, writer, and of course, lover, he bounces around getting into scrapes and beds. In the vein of Indiana Jones, you feel for his smart-alec character and wait impatiently to find out how he will get out of his current pickle. Andrew B. Wehrlen is the narrator and does a wonderful job. His voice lends itself to the smart-alec Chase and he breezes through the many accents needed for a globe hopping story. I have listened to many books just because he was the narrator.