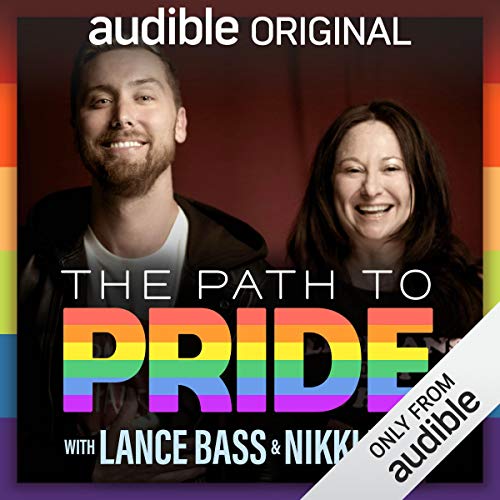 The Path to Pride with Lance Bass and Nikki Levy

The Path to Pride with Lance Bass and Nikki Levy

Celebrate Pride with Lance Bass and Nikki Levy in this live storytelling one-episode special from Audible.

Recorded live at the Los Angeles storytelling series Don't Tell My Mother, this special brings you heartwarming (and funny!) stories of coming out and being prideful.

Co-hosted by NSYNC heartthrob, Human Rights Campaign award winner, and near-astronaut Lance Bass along with producer and storyteller extraordinaire Nikki Levy, The Path to Pride is a joyful, hilarious romp down the rainbow brick road. You'll hear live stories from the stage from Frank DeCaro (The Daily Show, SiriusXM) about a high school crush who was the Bowie to his Elton John, Nikki's close (and we mean very close) relationship with her mom, and Zeke Smith (Survivor) tells the tale of his particularly public outing. Lance Bass brings it home with his story about being a teen pop star on the road with his darling (and super religious) mother, plus the turn of events years later which led to a life-changing People magazine feature.

So, grab your headphones, let that rainbow flag fly and get ready for a PARTY! This is not your average tell-all or memoir about the LGBTQ+ journey. The only tears here are from laughter! Let it hang, bae-bay!

This is an Audible Original Podcast. Free for members. You can download this one-off special to your Library now.