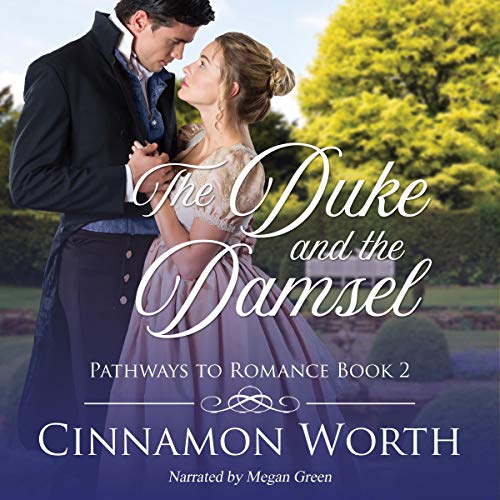 The Duke and the Damsel

By: Cinnamon Worth
Narrated by: Megan Green
Try for £0.00

The son of a Duke finds himself in a race against time - his freedom hanging in the balance. Can he find a husband for a stubborn woman who doesn’t want to marry? If not, he might be forced to marry her himself.

When Allison and Fitz are discovered together alone in a greenhouse, Allison’s reputation is threatened, and Fitz learns that Allison is not just another lady but is the sister-in-law of his closest friend. Using his wealth and power, Fitz hopes to avoid a union and salvage her reputation by silencing the witnesses. Unfortunately, one of the witnesses is Allison’s uncle and he wishes to see his niece marry.

Fitz suggests that rather than marry Allison himself, he will introduce her to a series of eligible bachelors so she can pick her own husband. The uncle agrees, provided a groom is found before he returns from a trip he’s taking to Ireland. Unfortunately, Allison does not want to get married.

Will Fitz's plan work, will Allison secure her independence, or will these two find themselves in love?

Set in regency era England, The Duke and The Damsel is the second standalone novel in the sweet romantic series, Pathways to Romance.

What listeners say about The Duke and the Damsel

This was a good listen but it felt rushed towards the end. Alison's problems after being found in a compromising position were glossed over and resolved very quickly at the end. We didn't get to see her being introduced to eligible bachelors bar one and a scandalous proposition from an unscrupulous character could have led to more drama but story arc came to nothing.
There quite a few cute and funny scenes which had me smiling.

The Duke and the Damsel

This is a really fun listen Allison does not wish to marry, but after being found in a compromising situation with Fitz her uncle insists. The story plays out so fun with the pair finding them selves in love after all. Megan Green does a lovely job on the narration.

Another amazing story written by Cinnamon Worth, and narration by Megan Green.
It was fun and interesting to explore the story of Allison and Fitz in this book.

Sweet but a little underdeveloped

This book was sweet and enjoyable but lacking a bit of depth. Allisopn and Fitz are thrown together because of a misunderstanding but feel compelled to address the issue as Allison's sister is married to Fitz's friend. True to the Regency period, the issue is related to potential scandal, a possible compromise and marriage. Namely Allison's marriage, hopefully to someone other than Fitz.

I feel the story from this point is a little underdeveloped. There are potentially dangerous and dodgy characters but that part of the story barely took off. I would have liked to see something come of these characters' interference. The two protagonists eventually end up together but the route to get there really lacked challenges and obstacles one would anticipate with a romance.

Reluctant to love couple find happy ever after

Think I liked this one even more than the first one in the series. I didn't really like Allison in the first story about her sister Julia, but in this one you see another side to Allison and why she doesn't want to find love or be in love. This is a standalone but you would be better off reading the first book as well to get more of the background to Allison's story. I wasn't sure if I liked Fitz at first but his attitude towards marriage is not uncommon in historical romances. I loved that he was the first to realise his feelings and then he had to find out how he could win her. Megan's narration was great, she quickly embodies the essence of the characters and she has a wonderful voice for historical romances.

The Duke and The Damsel by Cinnamon Worth

A very sweet and entertaining clean and wholesome romance. I love how they fell for each other even after believing that love isn't real or not for them. I'm so happy that they got their HEA. I hope to read about their future marriage so I'm super hoping there's another addition to this series. ❤

This was an incredibly sweet, clean HEA romance. I loved both MCs and by the end of the book I was smiling over how they found love in one another even when they thought it was impossible. The only thing that kept me from giving this 5 stars in everything was the fact that we don’t get a lot of information about why Allison is so reluctant to fall in love again. I read other reviews and it seems as this is discussed in the first book, but seeing as this is supposed to be a standalone and I haven’t read book one, I felt a little lost. However, that doesn’t take much from the overall enjoyment of the book and the romance.

The narrator was great and did a very good job in making each character have a distinct voice.

I received a free copy of this book upon request but this is an unbiased review left voluntarily.

I totally enjoyed this historical romance which is an extension of the first book in this series. I also enjoyed listening to Megan Green as she narrates this recording. Allison and Fitz are two peas in a pod in that neither one of them wants to marry for reasons of their own. It is amusing to hear of their attraction to each other that they keep writing off to other feelings. There’s also a bit of a mystery included in this story as you wonder just what the “villain” and the elderly spinster lady are up to. I voluntarily reviewed this after receiving a free copy.

Allyson and Fitz are are caught in a an innocent compromising situation, where Allison's reputation could be questioned. Fitz, a Duke, has no intention to ever marry, he's a confirmed bachelor. Fitz promises to find a suitable suitor for Allison with the outcome of marriage, she agrees to this arrangement. With each introduction to potential suitors , Fitz doesn't understand the feeling of jealousy he's feeling. This is a cute story I enjoyed listening to. Megan Green's narration was very good. I received this story free in exchange for an honest review.

Liked the story, not really the Duke

This was a great 2nd book in the series. I liked it as much (and sometimes more) than the 1st book. Unfortunately the narrator made Fitz sound whiney when I think he otherwise really wasn't.

The Duke and the Damsel is a clean and entertaining historical romance. I’m enjoying the recurring characters and being able to follow their lives, but it could be read as a stand alone. The narrator did a nice job in her performance.

Very cute story had a happy ending. Fun to listen to- the narrator did a pretty good job too. The ending leaves it open for another book.

I loved the narrator. I wasn't sure at first, but as the story moved along, I warmed up to her. This was a good story to curl up with. A hint of suspense, a little slower paced than some, and I was not fond of the ending. I would have like a an actual ending and not the beginning of another book.

Nearing the end of her third season, as the older sister to an already married sister, Allison realizes that spinsterhood is likely in her future. Tiring already of the malicious gossip and rumors surrounding her, she heads to the greenhouse to be among the plants that delight her and give her peace. Unfortunately, someone else has beat her there; a surly, arrogant duke. When they are discovered together, alone by a third party this person immediately cries “compromised“, leaving Allison in need of a quick, probably loveless, marriage to save her reputation.
With a story trope in the vein of Pride and Prejudice Allison may learn that love can blossom in unlikely places.
I received an audiobook ARC copy of this story, and I am leaving a voluntary review.

I liked this story. I thought it was sweet and fun. It took me a little bit to get used to the narrator, but I ended up liking her a lot. I can't wait to listen to the next one.