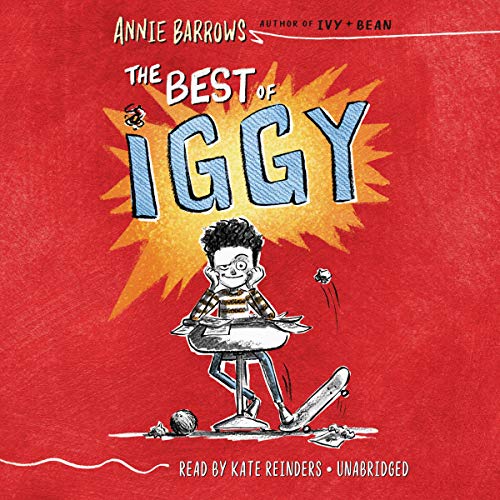 The Best of Iggy

The Best of Iggy

Meet Iggy Frangi. He's not a bad kid, he's really not. Okay, so he's done a few (a few is anything up to 100) bad things. And okay, he's not very sorry about most of them. People make a big deal about nothing. What's a little pancake here and there? Is that something to get mad about? Iggy doesn't think so. No one got hurt, so there's no problem. No one got hurt except for that one time, that one time when the Best Idea Ever turned into the Worst Idea of All Time.

Well, you'll have to listen to the audiobook to find out.

Things Iggy will not do in this audiobook:
Be the most polite kid ever.
Play the cello.
Think before acting.
Learn a lesson.
Regret his actions. (Most of them, anyway.)

"The first of a series, this slender chapter book is inviting to pick up, hard to put down, and near-impossible to read without laughing out loud." (Booklist, starred review)

"[A] lively illustrated series opener about Iggy Frangi, a mischievous, good-hearted nine-year-old who frequently lands himself in trouble and only sometimes regrets it.... With Iggy, Barrows (the Ivy and Bean series) has created a realistic kid - passionate, funny, and sometimes misguided - whom readers will surely root for as he gains awareness of the relationship between choices and consequences." (Publishers Weekly)

"The portrait of a boy as a young rascal.... Funny, silly, and fairly empathetic - and perhaps even consoling to young, impulsive people who hope to be better (someday)." (Kirkus Reviews)