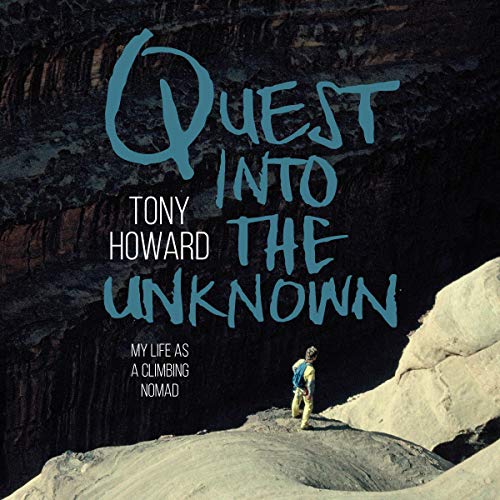 Quest into the Unknown: My Life as a Climbing Nomad

By: Tony Howard
Narrated by: Saethon Williams
Try for £0.00

We are all climbing where we are and with the gear we use in no small part due to Tony Howard's quest for adventure.

Tony Howard rose to fame in 1965 as a member of a group of young climbers from northern England who made the first British ascent of Norway's Troll Wall; a climb described by Joe Brown as, "One of the greatest ever achievements by British rock climbers." Tony went on to design the modern sit harness, now used universally by every climber in the world. He founded the company Troll Climbing Equipment but never stopped exploring.

Quest into the Unknown is his story.

Tony has dedicated his life to travelling the world in search of never before climbed rock faces and remote trekking adventures. The scale of his travels is vast. He has visited all of the North African countries, much of the Arab land of the Middle East, the mountainous regions of Scandinavia, Canada and the rocky spine of the Americas, the Himalaya, remote Indian provinces, South East Asia, South Georgia and Antarctica.

This audiobook, the last word in adventure travel, takes the listener from Tony's youth spent developing the crags of the English Peak District, via whaling ships in the Southern Ocean, thousand-mile canoe trips in the Canadian Arctic, and living amongst the Bedouin in the rocky mountains of Jordan to the isolated opium tribes of Thailand.

Tony Howard's Quest into the Unknown is the jaw-dropping account of a life of adventure that is the very definition of true exploration.

What listeners say about Quest into the Unknown: My Life as a Climbing Nomad

Tony Howard has been everywhere and climbed all over the place. His life sounds like it has been interesting but this book is just kind of boring. It’s like he is describing events to a police officer.

I went here. I ate this. I slept here. I climbed this. I went home. Over and over. There is no real overarching story, it’s just boring to listen to. It’s been a struggle from the start.