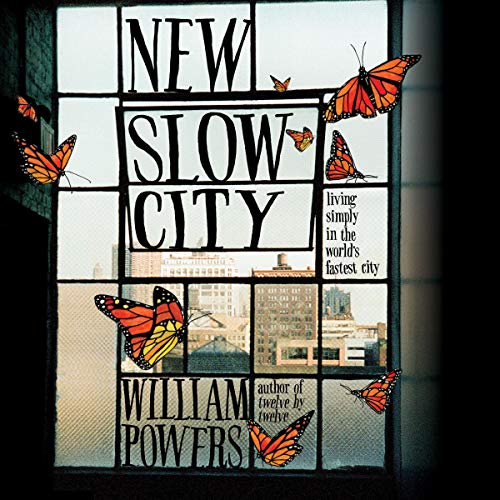 Burned-out after years of doing development work around the world, William Powers spent a season in a 12-foot-by-12-foot cabin off the grid in North Carolina, as recounted in his award-winning memoir Twelve by Twelve. Could he live a similarly minimalist life in the heart of New York City? To find out, Powers and his wife jettisoned 80 percent of their stuff, left their 2,000-square-foot Queens townhouse, and moved into a 350-square-foot "micro-apartment" in Greenwich Village. Downshifting to a two-day workweek, Powers explores the viability of Slow Food and Slow Money, technology fasts and urban sanctuaries. Discovering a colorful cast of New Yorkers attempting to resist the culture of Total Work, Powers offers an inspiring exploration for anyone trying to make urban life more people- and planet-friendly.

I think the book might be good but I find it impossible to pay attention because of the incredibly irritating narration :(. Shame because I was looking forward to it

I was excited to read this book but after a couple of chapters in, I could sum it up in two words... waffly and pretentious... Don’t bother, so disappointed.