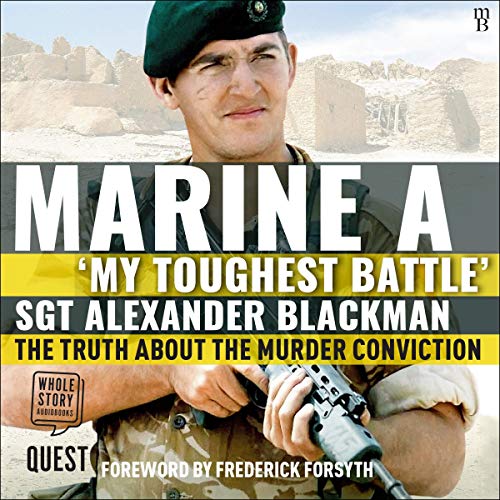 The Truth About the Murder Conviction
By: Alexander Blackman
Narrated by: Jake Wood
Length: 7 hrs and 55 mins
Categories: Biographies & Memoirs, Political Figures
4.5 out of 5 stars 4.7 (27 ratings)

For the first time, a blistering, highly charged account from the man known as 'Marine A' who was at the centre of the controversial murder of a wounded Taliban fighter. His case led to an unprecedented wave of public support which raised over £800,000 to fund his appeal. The nerve-shredding situations Sgt. Blackman operated within, under sustained attack for long periods, living in the unrelenting horror of a theatre of war, took their toll mentally and physically.

A great insight to a defining part of history, The story is great, and I enjoyed it.
HOWEVER: editing was poorly executed, as was some of the pronounceation (excuse spelling) ..... The poor editing did somehat ruin an otherwise brilliant book and you could tell the person reading the book had no clue of how to pronounce some of the words and just read them as written.

pronunciation of military terms made me cringe. who publishes a military audiobook without checking the 101 term pronounced wrong

Great story well documented and also Alexander should not have been.charged with Murder or anything else. What would the bosses have done if they were confronted by this situation. He was badly let down. I am glad he is a free man now. His wife is a star.

An incredibly honest insight into colour Sergeant Al B
lackmans life. To date, including the outrageous murder conviction handed down to him by the MOD court-martial and Jeff Blackett.
Typical of our political system to dishonour members of the armed forces and sacrifice them to satisfy the snowflake armchair critics and media.
A fantastic book clearly written from the heart of a genuinely decent soldier who was only doing his job under extreme circumstances in a situation that only a small percentage of people could even begin to comprehend.
I wish Al Blackman and his wife all the very best for the future.

horrible chance circumstance, one moment , one decision and fight for fair justice.
UK shame of establishment draconian MOD treatment of front line troops. Without the fair and the free of this country to speak up where would they be !