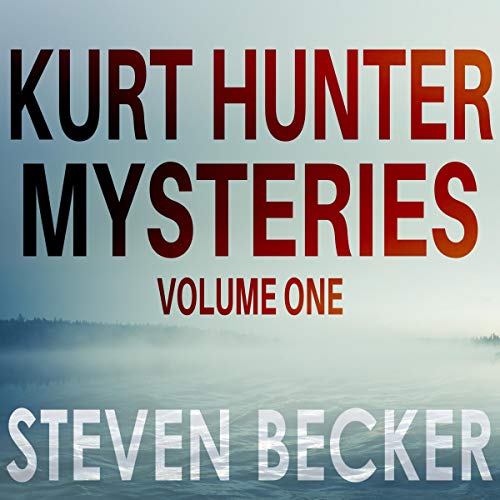 Get three bestsellers for the price of one.

When a body is found floating in the mangroves of Biscayne National Park, Special Agent Kurt Hunter has his first real case. He’s not looking for the spotlight or notoriety - he’s had both with disastrous results. But that seems unavoidable as the trail leads him to South Beach and his introduction to the culture there is anything but comfortable.

In the National Parks Service’s version of the witness protection program, Kurt quickly finds out that the pristine waters surrounding Miami are very different from the National Forest he transferred from. Follow Kurt through this new world as he unearths a crooked families greed to solve the case.

That’s what special agent Kurt Hunter thought until, while out fishing, he witnesses a murder at the Turkey Point nuclear power plant. After being assigned the case, Kurt is pulled into the convoluted politics of Miami only to find out that the embattled power plant is only a pawn in a more deadly game.

Greed and corruption are nothing new to pristine Biscayne Bay. With the plant's miles of cooling canals providing essential habitat for several endangered species, Kurt is thrown into a rift between warring environmentalists and power-hungry corporate executives all trying to advance their own agendas.

When National Parks Service special agent Kurt Hunter finds a woman washed up on his remote island in Biscayne National Park the case leads him to the world of high rolling boosters and the young players who will do anything to make their mark.

With millions on the line in the world of college football, recruiting the top players is crucial. Money and women are often used to lure the top high school prospects to schools. With big penalties for getting caught, boosters will do anything - even kill - to cover their tracks and keep their alma maters on top.

What listeners say about Kurt Hunter Mysteries, Volume One

Our central character, Special Agent Kurt Hunter, has been transferred from the mountains and forests to the mangroves of the coast of Florida in Biscayne National Park. In the three novels we experience Kurt getting use to life in, on and around the water whilst solving various intriguing crimes. The writing is very good with interesting plot lines and characters plus satisfying twists and turns. The narration is just right making for a very rewarding listen. Each novel can be standalone but best read in sequence to enjoy the characters development. Highly recommended.

This is not the normal type of book I purchase, but I am so glad I took a chance. I don't fish nor do I drive a boat and I have never lived in the south, but I thoroughly enjoyed all three books that are included in Volume One!! I particularly enjoyed the narrator's slow and easy going style; he handled the various characters easily and kept me interested all the way through the end of book #3!! I think this author is going on my must read again list.

BACKWATER BAY ..Book 1 Special Agent Kurt has relocated from California to Florida. Having seen to much there he needed a low key job, Which this was mainly watch boats going to fast, coming into shallow water. Going out to the mangrove area. checking it out of why a large trawler would go there, he finds a dead body. With a boss that just wants to cruise into retirement, this won’t please him. Another laid back, with the scenery of the Florida waterway, meeting the people makes it an enjoyable story to read. Great series, to have three of them in this set.All are good, enjoyable as was the narration. Given audio for my voluntary review and my honest

I found this audiobook to be a very very good listen . It has a great combination of mystery, murder and suspense. The narrator does a wonderful job of reading this book.

This three for one deal (BACKWATER BAY, CHANNEL AND COVE) wasn't worth the price of one credit for me. There are some interesting descriptions of the South Florida Everglades / Homestead / Turkey Point area, but I'm not a fisher(person), so could care less about the fish and fishing advice given profusely. I can't think of another redeeming quality, though I am trying because I don't like to be negative about anybody who can get a novel published. The narrator doesn't match up with his role as the love interest to a much younger sounding female. Cute "bad boy" falls flat. Just not for me. 5/6/19