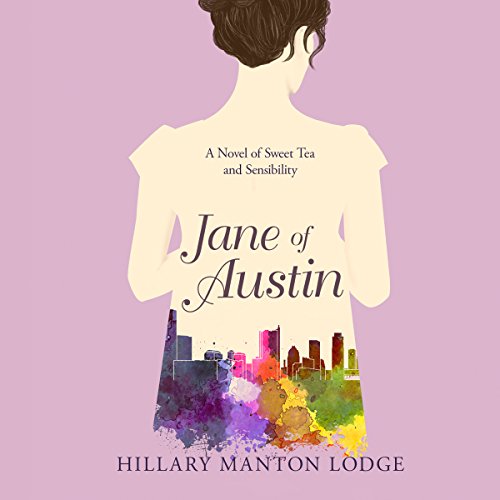 By: Hillary Manton Lodge
Narrated by: Kate Handford
Try for £0.00

This hip contemporary romance combines Jane Austen-inspiration and foodie fiction in a witty and engaging tale of two sisters who are forced to uproot to unfamiliar Austin, Texas, after high rent and broken relationships force them away from their San Francisco life. In this Sense and Sensibility adaptation, Jane Woodward and her sister Celia run a small tea salon in San Francisco but are forced to relocate to Austin, Texas. While trying to start fresh and settle in, Jane meets a dashing musician, Sean, who steals her heart, but not before catching the eye of another suitor, military veteran Ben Fredrickson. The sisters drift apart, lives collide, dashing men steer Jane off course, and she discovers that adjusting to a new life is trickier than she anticipated.

What listeners say about Jane of Austin

Three girls are living their dream

Three girls are living their dream of owning a Tea House.First in San Francisco, then circumstances move them to Austen.

Loved this story, so sweet!

This was such a sweet story, it really held my attention. The narrator was excellent as well, she kept distinct voices for each of the differemt characters. I was left wanting to drink tea, read some Jane Austen, and try out some of the yummy recipes mentioned between the chapters. this might be a book I need to go out and buy in the paper version :)

To begin, a few words about the narrator: while she wasn't necessarily bad, she was very poorly-suited for this particular book. Ms. Handford has a distinctly Canadian accent, and, while the novel opens in San Francisco, Austin, Texas soon becomes the novel's setting; thus, many of the characters are Texans. Although Ms. Handford does give these characters &quot;southern&quot; accents, some of her pronunciations are still exceedingly Canadian--the word &quot;been&quot; comes to mind (in her pronunciation, it rhymes with &quot;seen&quot;; I'm not sure if you'll find many Americans who pronounce it that way, but you certainly won't find any Texans who do!).

Another note on the narrator's rendition of Texan accents: I would wager she likely isn't acquainted with many Central Texans, and likely hasn't ever visited Austin. First, a generalized (and not very adept) southern accent is not really a good approximation of what a Texan sounds like. Also, the mere fact that every single Austin character has a fairly strong southern accent would be highly unlikely, even if they are, presumably, natives. As a lifelong resident, I'd say we have as many watered-down (almost neutral) Texan accents as we have exaggerated drawls. When you think of Texan accents, you may instantly think of Matthew McConaughey or Tommy Lee Jones, but then you also have Steve Martin, and Jim Parsons, and both of the stars of Supernatural, whose voices are far less obviously Texan.

Okay, on to the story itself! I must confess, though the description was promising enough, it was probably the fact that it was set in my hometown that really lured me in. Sadly, having read it, I cannot claim to have been pleasantly surprised, and must, in fact, conclude that its setting (with references to familiar locales), is the best thing about it. Another positive is that some of the characters were fairly endearing--Callum, in particular, with Margot coming it at a close second, which is saying something, considering she is far less prominent a character than some others (namely, Jane).

At the beginning of the story, Jane was almost unlikable; despite being quirky, bookish, and decidedly practical, she seemed, not just serious, but downright uptight (verging on irascible at times), self-centered, and ungracious (particularly where her accommodating relatives are concerned). Unfortunately, once I no longer perceived her this way, I found that I instead thought of her as suddenly vapid and dispossessed of her purported intelligence and emotional depth. It was hard to reconcile the intense bluestocking of the first couple chapters with this twit who instantly falls for the too-handsome knight-in-cowboy-boots. It makes her seem either very naive, or very shallow, which is at odds with the way the author seems to want us to view Jane.

As to the other sister, Celia, she seems far more generous of spirit than Jane, but she's pretty boring. I found myself consistently uninterested in checking in with Celia. Overall, she is like wallpaper--perhaps pretty and nice to look at for a moment or two, but easily fades into the background. And her overall relevance to the story seems to be limited to two areas: serving as a parallel to characters in Jane Austen novels, and serving as the catalyst in the Woodwards moving from San Francisco to Austin. She is otherwise fairly unnecessary, and, really, she could have just as easily been left out.

Characters aside, my biggest complaint is that there isn't a whole lot of substance here; plot-wise, it's pretty thin. I feel like the book is way too long for what it offers, and could have easily been told in half the time. In fact, cut in half, it might be a vastly better story; this would have given it just the right amount of time to lay out all its charms, instead of filling page after page with lackluster fluff, for the sake of protracted eventualities.

i loved it. it was fun, light hearted and refreshing. I did not want it to end

Interesting plot, some characters okay, some characters came from cartoons. I struggled with this book. Many great reviews both reading and listening types. Not great for me, especially the narration. Maybe if I had read it I would have appreciated it more.

For the love of tea and sisterhood!

I loved everything about this book! As a lover of Jane Austen, tea, romance, and my sister, this book delivered it all. Very well written and read, with just enough surprises and intrigue to keep you wanting more but refreshing and uplifting all together. I tho k I found a new favorite book to add to my list and a new favorite author to discover more from.

I have had the ebook of this novel on my Kindle for ages but I am glad I chose to listen to the recording. The narrator is excellent and the story is well done. I liked that the author kept some parts but gave things their own spin. This becomes more Jane’s story (Marianne) & I felt her character was more drawn out than Cecilia’s although both were likable as was the Colonel Brandon character, Becket. I loved the tea shop background & the included recipes. A really sweet escape.

story was enjoyable, not crazy about the narration.
besides using a stereotypical twangy accent for each texan character that lived in AUSTIN, home of the many hipsters not honky tonk cowboys.
and this is just a small thing, but the way she pronounced some of the words was very disconnecting.
like whenever she said the word appreciate or appreciating, she says it with no R.
it was weird and hit me every time she said it, which was a lot.

This was a cute update in modern times of "Sense and Sensibility" and a fun read. At times it was a little slow or the characters were a little too slow to come around, but the overall effect was really fun...and cute to set it in trendy Austin!

I adore this book!

I loved it so much, I've listened to it twice. The story makes you feel warm and fuzzy at the end, which is what I was looking for. The book also wasn't overtly sexual, which I really enjoyed. It's perfect for anyone looking for a sweet romance that isn't saturated in sexual content.