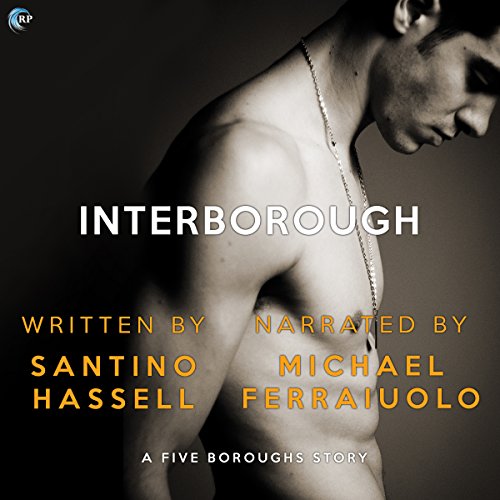 The Raymond Rodriguez from a few years ago wouldn't recognize the guy he is today. He's left his slacker ways far behind him and is now juggling two jobs and school. But the balancing act doesn't allow much time for the man he loves.

David is doing his best to be supportive, but problems at work and his own insecurity leave him frustrated - in more ways than the obvious - whenever he goes to bed before Raymond gets home. The heat and affection between them is still there, but they barely have the time or energy to enjoy it. And it doesn't help that Raymond is still hiding David from his colleagues.

The stress mounts so high that a vacation in paradise is filled with turmoil instead of harmony, and culminates on their return to the five boroughs with broken promises and heartache. They have to figure out how to stop allowing their differences to overshadow their love. It's the only way they'll make it to forever.

I was so happy to see this on Audible. This is such a great group of characters. Narration was excellent!

A study in real life.

I'm not sure what it is about this series, but the stories depress me for about the first 3/4's of the book. I'm not sure if it's the realism or the issues or what. But notice that hasn't kept me from reading them. hehehe.
There were times when I really disliked both of these characters. Ray is just so 'Yeah, yeah, I got it. I got it' when he doesn't 'got it' at all and David is a bit of a drama queen. Okay, he's more than a bit of a drama queen. They are both responsible for their issues getting out of control. But, we are also given enough information to understand why.
The story is very real. The dialogue is solid. The characters are solid and mainly well known from previous books. The issues are recognizable and have probably been experienced by anyone in a serious relationship. The writing is pure Santino Hassell, in other words, great. And the narration by Michael Ferraiuolo brings it all to life.
I always say that I love looking at the world through my rose-coloured glasses, but occasionally a book like this will just rip them off my face and stomp them into the ground. But that's okay, 'cause then I get to go out and buy a new pair. ;)

I re-read (listened) to the audio version, of course I read this on release day being a huge Santino Fangirl. I am always amazed how I can be so affected by a story that I have already read. I love this series, the characters are so rich, so true to life - this book is especially real. The relationship problems are genuine- money, time, insecurities these are such every day issues that I have been through. The emotion & the personal connection between characters in the writing is his signature, it’s so unique the way Santino captures feelings, pain, love and passion.

Another amazing chapter of the Five Boroughs story

Thank you Santino Hassell for another amazing in this series.
Took no time to get submerged into the characters and surroundings.
Looking forward to book five from you Santino.

The only thing better than reading a Santino Hassell Five Boroughs novel is listening to Michael Ferraiuolo read it to me.

Interborough is no different. He makes the whole experience a pleasure! Although the publishers website indicates this as a standalone read, as the fourth in the Five Boroughs series, I feel they are better enjoyed in order.

David and Ray have been together a year now and the honeymoon phase is over in a big way. They’re often apart due to conflicting schedules and much of the time they do spend together they’re fighting.

Ray is so freakin’ stubborn and pig headed, and David’s over the top emo bullshit drives him crazy.

This is Ray’s first committed relationship and he needs to learn to deal with David’s expectations if he wants this one to succeed. As his friend Sharky tells him, “There’s more to life than making someone come.”

The chemistry between David and Ray is off the charts and both their fighting and the making up is intense.

Starting with the opening scene of David seducing Ray by sucking on a Popsicle (okay I’m easy to please), and the rest of the way through this soap opera.

I love Ferraiuolo’s style of narration because he brings so much to the story, he enriches it with his inflections and subtle nuances in the dialogue. Each character has a distinct personality and the way he flows seamlessly between each of them is amazing. He keeps the drama fresh and entertaining.

The variety in the narrator’s characters and their consistency adds to Santino Hassell’s fantastic story to make a great series even better.

Ferraiuolo’s Raymond is perfection! He’s got that accent down and keeps it consistent, and it plays off “preppy white boy”, David, perfectly.

Interborough and the entire Five Boroughs series have been amazing to enjoy in audio and I highly recommend both the author and the narrator. I only wish the review platforms allowed a half score as Interborough’s story would definitely rank a 4.5 from me while Ferraiuolo’s translation is a beautiful 5.

I just love this series. Such a real, honest, believable set of characters and stories. It's so easy to get invested in them because you truly feel like you know that.

What really makes this a 5 star book, however, is the narration. This narrator does the best accents and character differentiation. There are so many characters throughout the book and I never have to question for a second who each speaker is. I just can't so

Can I breathe now! This is an utterly beautiful wonderful just for me audio.
I have been listening to all 4 these last few days and I feel like I am floating on a cloud .
Santino's words are graphic and true - ♥️
Michael Ferraiuolo your perfect your accent ♥️♥️♥️
I am going to start them over again now !
Thanks 💖

Perfect Narrator for this Series

Loved the story, but the epilogue melted my heart.

Wanted to? I did. Listened in one sitting, couldn't stop, and didn't want to stop.

This is such a realistic romance, where the main characters are far from perfect, and screw up (sometimes royally), where they are just these complex and flawed people, but who are also so completely relatable, that you cannot help rooting for them to pull their heads out of their a***s (*cough* mainly Raymond *cough*) and realize what's there for the taking. True love.

I loved it. It's got a great plot, the pacing is pretty darn perfect, and Raymond and David have great chemistry together. Though there was some miscommunication, it fits really well and it didn't feel unnecessary to me. It also has just the perfect amount of angst.

Michael Ferraiuolo is the perfect narrator for this series. 100% - he brilliantly narrates these characters, bringing the emotion and sentiment of the story to life.

I absolutely loved the audio and story - Highly recommended.

Note: this shouldn't be tried as a standalone, you really need to at least read and/or listen to the first two books of the series in order to follow along easily.

I remember when I first read this book. I sat down and started it, not getting up again until I was finished. This happens a lot with Santino's books.

Listening to it was almost as good as reading it for the first time. The narration is perfection. Michale Ferraiuolo has a beautiful voice, making the characters come to life in a way few others could.

The story stands strong. Powerful, beautiful, heartbreaking and happy. It's one of my favorites in the series and I'll probably listen to it over and over, until the end of time. Because stories about love live forever.

I wish I could give this story 5 stars but the stumbling block for me is David's personality. I just can't get passed his girly, privileged/spoiled behavior. Raymond on the other hand, I adore. I can relate to Raymond's personality - the edginess, masculinity, dominance, single-mindedness, alpha, yet sweet and affectionate when it comes to his man. For me, masculinity in a gay man who is out and proud and don't give a damn about other's opinion of him is hella sexy. Femininity in a gay man, not so much. To each his own but that's why my overall rating is 4 and not 5.