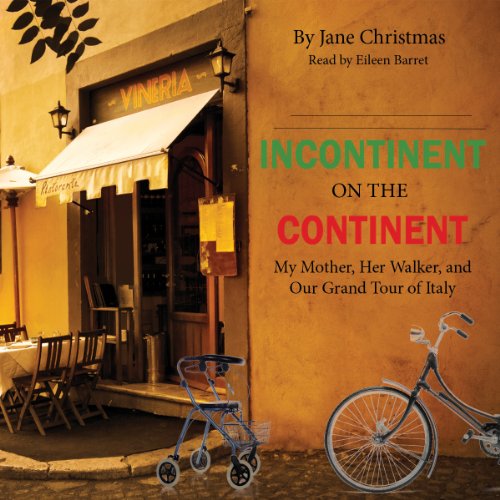 Incontinent on the Continent

My Mother, Her Walker, and Our Grand Tour of Italy
By: Jane Christmas
Narrated by: Eileen Barrett
Length: 8 hrs and 26 mins
Categories: Travel & Adventure, Essays & Travelogues
5 out of 5 stars 5.0 (3 ratings)

Incontinent on the Continent

In this travelogue of self-discovery, Jane Christmas brings her wickedly irreverent style to a new mother-daughter experience. Since the beginning of time, mothers and daughters have had notoriously fraught relationships. "Show me a mother who says she has a good or great relationship with her daughter," Jane Christmas writes, "and I'll show you a daughter who is in therapy trying to understand how it all went so horribly wrong."

To smooth over five decades of constant clashing, Christmas takes her arthritic, incontinent, and domineering mother, Valeria - a cross between Queen Victoria and Hyacinth Bucket of the British comedy Keeping Up Appearances - on a tour of Italy. Neither has been to Italy before, but both are fans of ancient art, architecture, and history. Will gazing at the fruits of the Italian Renaissance be enough to spark a renaissance in their relationship?

As they wander along the winding Amalfi Coast, traverse St. Peter's Square in Rome, and sample the wines of Tuscany - walkers, biscuits, shawls, and medications in tow - they revisit the bickering and bitterness of years past and reassess who they are and how they might reconcile their differences.

Unflinching and frequently hilarious, Incontinent on the Continent will speak to all women who have tried to make friends with their mothers.

"The personal journey she shares is one with which more and more of us are dealing as all our lives move, with welcome and enriching detours, down their one-way streets." ( Globe and Mail)
"I'm certainly glad we had the trip. The book shows we had a wonderful time. It was good. It's no fun with a walker. The spirit is willing, but the flesh is weak." ( Toronto Star)

A trip through Italy (and so much more) told by a talented raconteur. Expertly narrated, right down to the accents of the speakers. This is a really enjoyable and easy listen.