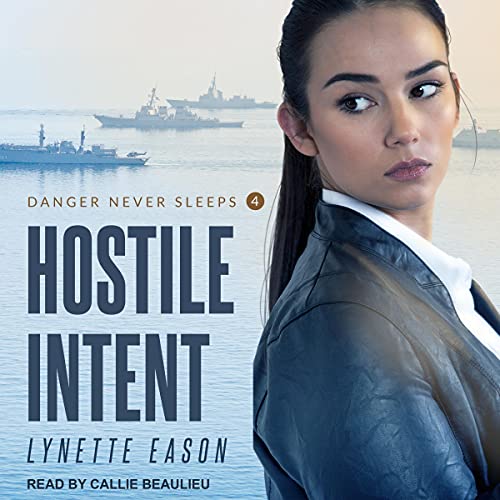 By: Lynette Eason
Narrated by: Callie Beaulieu
Try for £0.00

Ava Jackson entered the military shortly after high school, but her mother's illness has forced her to request an early discharge. She already lost her father while deployed, and there's no way she's going to let her mother die alone. But after a visit to the nursing facility where her mother lives, Ava is attacked walking back to her car. Fortunately, FBI Special Agent Caden Denning arrives in time to help fight off her attacker.

Caden reveals to Ava that she may hold the key to the murders of three families, and he needs her help before anyone else is harmed. The hits show a pattern, and clearly the killer has an agenda. But if Caden and Ava can't discover what it is, Ava may be next on the hit list.

Best-selling author Lynette Eason concludes her latest suspense-filled series with a bang as secrets are revealed and the guilty are brought to justice.

What listeners say about Hostile Intent

Edge of the Seat Suspense:

Excelent storyline that kept me on the edge of my seat. Lynette has outdone herself with this book and in fact this whole series. It is a must read and prepare to read it straight through because once you start reading, you won't want to put it down. All our favorite characters from the preveous three books are in this one as well and we see them come together as friends to to help in times of crisis. Because I listen to the books, the narator Callie brings the story alive with her amazing reading style and making the book come alive. This book should be read by anyone who loves suspense, even those who are seeking God because as in every other book that Lynette has written, those who seek God and His love and salvation will find Him in this book. Again, Amazing and I am sorry to see the series end.

I really liked how this story unfolded. It was well narrated and kept me in suspense a couple of times.

Not horrible but not good

This book starts off well and that quickly evolves into something totally predictable it’s very repetitive. The story is more in line with what a 12 or 13-year-old would find entertaining and novel. Additionally the narrator was choppy and somewhat annoying by the end.

I would have rated this higher but the narrator made this hard to listen to, she did good job but I can't stand her voice.
The story itself is very good though. I will probably read other books by this author but be getting the paper/kindle version.

Really enjoyed this book and series. I am going to say at the outset that I hope there are more adventures from these characters. This book had me on the edge my seat, was fast pace but you did have time to catch your breath. I was conflicted with this book as I wanted to know what was going to happen next but I didn’t want it to end. Than you Lynette Eason for this series with strong women and bring them back…please.

Lynette Eason has written another wonderful book! It has suspense and depth. Callie Beaulieu’s narration adds to the storyline with true emotion. So enjoyed this audiobook! I cannot wait for Lynette Eason’s next book!

Loved listening to it. Struggled with wanting to fast forward to find out more.

Listened in one sitting

That’s the usual thing for me, to listen to Ms. Eason’s books in one sitting. It’s difficult to do much else
This book was a bit more violent (although most of the violence was alluded to) it may not be for some listeners.