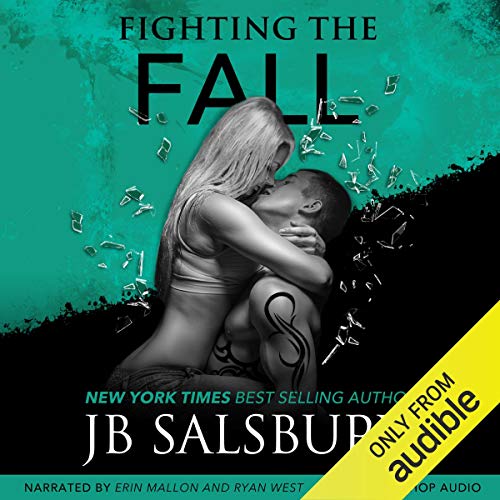 The toughest fighters aren't created in the octagon but are born of necessity. When life delivers blow after punishing blow, you fight back or get destroyed.

Eve Dawson has had her fill of bad luck. A string of unhealthy relationships has left her angry, bitter, and frustrated. She's given up on being happy and settles for content. Swearing off men, she repels advances and makes herself a challenge to even the most persistent suitors. After all, how much can the fragile human heart take? But life isn't finished with her, and when things can't possibly get worse...they do.

Stay on your feet.

It's Cameron Kyle's motto, but with his fighting career ripped from his grasp, a child he wasn't strong enough to save, and a marriage that even the brawn of a heavyweight couldn't hold together, it's getting harder and harder to stay upright. He takes on the position of CEO of the UFL, intent on hiding his biggest weakness in order to forge a path that leads him back into the octagon.

When an old rival mysteriously gets wind of Cameron's plan to fight again, he comes out of retirement to settle old debts, but secrets, lies, and betrayal threaten to deliver the deathblow. The distraction of a sass-mouthed girl 17 years his junior is the last thing he needs - until a tragic accident shatters the firm foundation of his resolve, and he realizes just how far he's fallen.

Will they risk it all and fight to be together?

Or, does defeat lie within the fall?

What listeners say about Fighting the Fall

probably my favourite of the series so far. Read superbly, as usual. Really don't want this series to end.

Would you listen to Fighting the Fall again? Why?

What was one of the most memorable moments of Fighting the Fall?

What does Erin Mallon and Ryan West bring to the story that you wouldn’t experience if you had only read the book?

THEY ARE FANTASTIC BRING THE BOOK TO LIFE

SUCH A GOOD BOOK, HAD ME IN TEARS AND ON THE EDGE OF MY SEAT. JUST LOVE ALL THE FIGHTING BOOKS.X

This series is my "go to" series when I need something entertaining. This story is book 4 in the series, it is a stand alone, although I recommend reading the others as well. This is not my favorite -- not because of the angst of the May-December relationship, I just did care for the weakness in Eve's character. I realize I am in the minority here; she is a likable character, I just did not feel that her justification of being "used" by men was a valid one. Cam on the other hand is a swoon worthy man with real emotional demons that were relatable. I recommend the listen and it is credit worthy! I just wanted to forewarn those of you who like strong female heroines she is not the strongest. This series is one of the best I have read.

I really like this series. But I found myself yelling at the book telling Cameron to go away. Eve can't be this weak! The fact that this book got such a response from me , shows what excellent writing this was. Cameron and Eve are 2 of most pathetic undeserving people I've ever read about. Oh I'm still so disgusted! But great writing! Thanks for the rollercoaster!

I love a good May-December romance, couple that with a storyline that tugs at those pesky heart strings, and I'm an emotional mess! I liked that Cameron was looped in as a primary character instead of JB just plowing through fighter after fighter in the group. Pairing him w/Eve was genius--she was a hilarious character from book one, and the dynamic between the two was sexy, funny, and made my heart melt over and over again.

BRILLIANT... FROM THE PROLOGUE TO THE EPILOGUE

Cam and Eve have so many emotional demons haunting them that they're both willing to just settle.... settle in a relationship that can't go anywhere or move forward - not until they let their painful demons go free. The past is interfering in their futures - in Eve's case, she feels unloveable and unworthy and in Cam's case it's guilt at a heartbreaking tragedy that he accidentally caused which ruined lives. Eve is willing to lower her expectations to be wanted and needed and Cam is willing to take, use and then move on.

Through edge of your seat dramas, hot and passion filled sex scenes and many angst-ridden events Eve fought hard not to fall into the same pattern as before and Cam fought hard not to fall for Eve and they both fought jealousies, confusion and being hurt again. And, for a while their tactics worked but in the end neither one could fight their heart's desires so, despite all the emotional baggage and pain, love was eventually the happy victor. Good character development by a handsome, successful, dominant Alpha Hero and a feisty yet vulnerable Heroine who are both pushed into changing for the other.

This has to be the best one yet, it seemed to go on and on and yet it still wasn't enough because it left me wanting more - more of an Epilogue that would keep me linked into the lives of characters that I'd grown to care about. But alas it had to end sometime and I can always revisit them and probably future books will hopefully keep me up-to-date with Eve and Cam's lives. Great dual POV narration that catapulted a great book into an intense and brilliant listen.

Worth a credit? From the Prologue to the Epilogue it captured and held me riveted to what was coming next which surely makes JB Salsbury a gifted Author and it definitely made it a creditworthy listen.

I should've given this 5 stars but...

The main female character Eve really annoyed me with how pathetic she was. She was constantly holding back what she wanted to do or say because she was afraid of Cameron 's reaction. It was super irritating! A few times I caught myself speaking out loud to the Eve character. There was a lot of " Oh, come on!" and "Seriously!!" Flying out of me. She got a little better towards the end. Also, Cameron was described as a man who likes a woman that knows what she wants and that did not seem to be Eve at all. All in all, as part of a series it was decent. So far, Fighting to Forgive has been my favorite.

The heroine in this book is just too dumb to make Fighting the Fall enjoyable. Eve constantly throws herself at Cameron no matter how many times he treats her like trash. She makes poor decisions when it comes to her father and consciously makes a ridiculously stupid decision at work, all while knowing that a her boss was watching her like a hawk.

Cameron was not much better. A dictating asshole, who is a wonderful caretaker to his ex, yet treats Eve.

Unlikable and unintelligent MC’s in an unhealthy relationship makes for a 2 star romance.

I LOVE LOVE THIS SERIES

All I can say is the narration is great and the writing even better. I can listen to these books over and over again. I would like a little more stoking detail in the Nookie scenes. Just But It because it's a five star listen

These books are getting better and better. From book one the narrators and the stories kept me downloading them. In this book the characters develop also through the story and that was missing in the previous books.

The series is getting better

The east book is still my favorite, but this one was pretty good. I do have to say that at one point I wanted to reach into the book and slap them both though. I can't wait to hear the next book.

This novel is so magical. I am just speechless, this story is so realistic and I am so happy I took a chance on this book. This book is the only book I've learned something from, this story has touched my heart. I'm a puddle of tears over here ladies and I really hope you all take a chance.