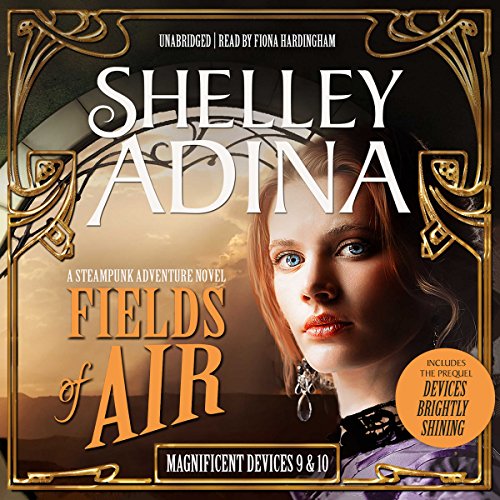 Her father may have sacrificed his own life to save hers, but heiress Gloria Meriwether-Astor is finding it difficult to forgive him. After all, how many young ladies of her acquaintance will inherit wealth, beauty, and a legacy of arms dealing? Now the Royal Kingdom of Spain and the Californias is about to declare war on the Texican Territory and Gloria simply will not allow it.

In company with Alice Chalmers and the crew of Swan, along with a lost young Evan Douglas seeking to make reparation for his own sins, she takes to the air. Her intention - to stop the train carrying the final shipment of monstrous mechanicals into the Wild West. But they should have known that making a deal with air pirate Ned Mose in exchange for his help could never end well.

What listeners say about Fields of Air

AS enjoyable as ever

This series continues to be a consistently good listen and, as usual, having listened to this one leaves me impatient for the next.

Full of character and really brings the story to life

I have been waiting for this audiobook to come out with barely repressed excitement - I love these books and have read all of those released so far, but I love to listen to the audiobooks too. The only problem is that the audiobooks are behind the books in release, so it can be a bit confusing! However, it's a great excuse to relisten to the others again when the new ones are released (not that I need an excuse!)!
Anyway, this one is great as it has the Devices Shining Brightly novella included in it (which is essentially just a bridging book from the last to this, with a big party included!!) so it's double the value! And with Fiona Hardingham narrating again, this audiobook is, of course, full of character and really brings the story to life. I'd definitely recommend it to all Magnificent Devices fans, and can't wait now for the next audiobook to be released - there's at least one more before we catch up with the released books, so please Shelley, don't make us wait too long!

I listened to the first 10 on Audible. This review applies to the entire series.

I just binge listened to the entire Magnificent Devices series on Audible (how else to spend 12 credits?).

I look forward to, “Fields of Iron” and “Fields of Gold” being released in audio format. Other than the fact that the reader cannot do a decent American accent, they are fabulous. I do not fault that as most people in England would say the same about an American doing their accents. 🤣

I appreciate the author keeping this series fun and clean. (Though there is war violence) I love steampunk but have a hard time with the pervasive sexuality of so many series. I don’t need the selacious to distract from writing ability, story line, character development.

I highly recommend this series.

I was pleased with this book. I like the characters and the setting is interesting. As this is my first foray into this series, I am very interested in checking out the books that came before this. The narrator did a good job as well.

Beware! Not a standalone

Lovely and enjoyable steampunk adventure / romance, but it is not a standalone at all and so is a poor choice as "included"