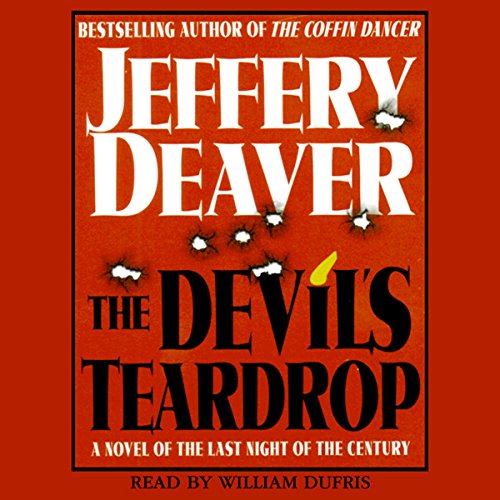 By: Jeffery Deaver
Narrated by: William Dufris
Try for £0.00

After an early morning machinegun attack by a madman called the Digger leaves dozens dead in the Washington, D.C., subway, the mayor’s office receives a message demanding twenty million dollars by midnight or more innocents will die. It is New Year’s Eve, and with the ransom note as the only evidence, Special Agent Margaret Lukas calls upon retired FBI agent and the nation’s premier document examiner Parker Kincaid to join the manhunt for the Digger - or for hundreds, the first moments of the new year will be their last on earth.

What listeners say about Devil's Teardrop

Mr Deaver certainly is the master of twists and turns in his plots - and was surprised by most of these. An excellent book, nicely read and full of suspense. I rushed through it to find what happened, and will reread to savour it better.

Just when you think it's almost over.....

Loved this book. Deaver has so many twists and turns, it keeps you guessing. He portrayed the Digger wonderfully. The singing was a great touch. Every mystery reader needs to read/ listen to The Devil's Teardrop. The characters are such that you feel you know them.

Sometimes Deaver needs to dispense with the minutia of the investigative process and just tell us a good story. This is one of those times. The details of the investigator's personal life were an unnecessary distraction; abridging them would help maintain a more suspenseful story. The CI101 is also far too detailed. It sometimes felt like we left a novel and entered a textbook. The strung out ending just made me want to say "enough". Not one of Deaver's best efforts.

First switch: it's the investigator who has special, esoteric knowledge rather than the killer.
The rest of the switches: you will predict several of the mysteries, but not all of them. Deaver is Deav-ious! This book is thoroughly captivating all the way through. A cameo from Rhyme is a special pleasure.

I would love to see more of Parker Kinkaid.

I love Edoardo Ballerini's voices for the Lincoln Rhyme books, so looked askance at this for a moment. Since it is a completely different character, it would actually be wrong to have Ballerini do it. Dufris is great here.

This was an exceptionaly read book. The reader did a wonderful job of switching voices! The only problem I had was with his pronounciation of the Potomac River. If you are going to read something aloud ask the locals on how to pronounce the names of landmarks. The river is pronounced puh-toe-mik. It was very annoying. Take a little time to do some research.

Good but not his most riveting

Once again, a great book from Mr. Deaver. He has the ability to keep you on the edge of your seat and didnt fail this time.

Too much incredulity even for fiction

This listen has a major turn about four-fifths of the way through the listen and I was initially bothered by it. But as the story continued to unfold I disliked it less. The detective work and the action segments strained credulity but not enough to completely turn me off. The narrator did a good job of making each character identifiable but the author created a dialogue for Digger, the bad guy, (click, click etc.) that not even the best of narrators could rescue. And this narrator didn't get close. It was terribly annoying. Deaver is a great author so even his subpar work is passable. This was subpar and passable. If you can purchase the book on a sale, it's worth it. Lots more I could say but I think I've said enough. Average.

struggled to get into this with the performance. once I got used to the narrator it became enjoyable and interesting.

Jeffery Deaver at his most interesting read .

Would you consider the audio edition of The Devil's Teardrop to be better than the print version?

Have never read Deaver , only found him on Audio . I like Audio .